In 2015 the Conservancy joined with the National Trust for Historic Preservation, Landmarks Illinois and local preservation organizations to prevent utility company ComEd and the Kane County Forest Preserve District from implementing a plan that would route new 140-foot electric line towers through preserve land and within 400 feet of the Wright-designed Muirhead Farmhouse (1950) in Plato Township, Illinois. A member of the Muirhead family still owns the Usonian house, which has previously operated as a bed and breakfast and has drawn tourists from all over the world.

The Illinois Commerce Commission ruled that covenants prohibiting such placement of power lines, which were established when ownership of the land on which the Muirheads 1950 Usonian house sits was transferred to the Kane County Forest Preserve District, pose enough of a threat to the ComEd plan to scrap it. Instead, the lines will be built along a path that doesn’t cut through protected portions of the forest preserve land or threaten the farmhouse. The Conservancy had sent a letter urging the ICC to maintain the previously approved route that avoids intrusion into the Muirhead site, and also attended the February ICC evidentiary hearing on the matter.

The owners thanked the Conservancy and the coalition of organizations and stated that even though the power line proposal was eventually turned down on other legal grounds, “We believe your letters were an influencing factor for ComEd … [and] they clearly indicated the historical significance of the home and that the power line would be a negative factor on the property.”

The Muirhead case demonstrates that sometimes saving a building means saving its site.

The house is a wonderful example of Wright’s approach to meld simple, beautiful design with a special relationship to the natural world and producing architecture that was affordable for middle-class families. Site selection, building orientation, relationship to the landscape and viewsheds were all extremely important in Wright’s designs and play a key role at the Muirhead Farmhouse and its site. The original proposed location of the towers, proposed by ComEd and previously approved by the Illinois Commerce Commission, was sensitive to the site of this building. The proposed new placement would have had a very negative impact: 160 foot towers looming in close proximity to the house would be a prominent and devastating first visual when entering the site. The towers would be seen from virtually every room of the house that faces south, including the bedrooms, living room and breezeway. This is totally in opposition to one of Wright’s cardinal principles—providing a strong bond with nature and bringing the outside in. The imposition of these towers would have gutted Wright’s design vision for the house: It would not demolish the house but would demolish the site, which is an integral part of the design. 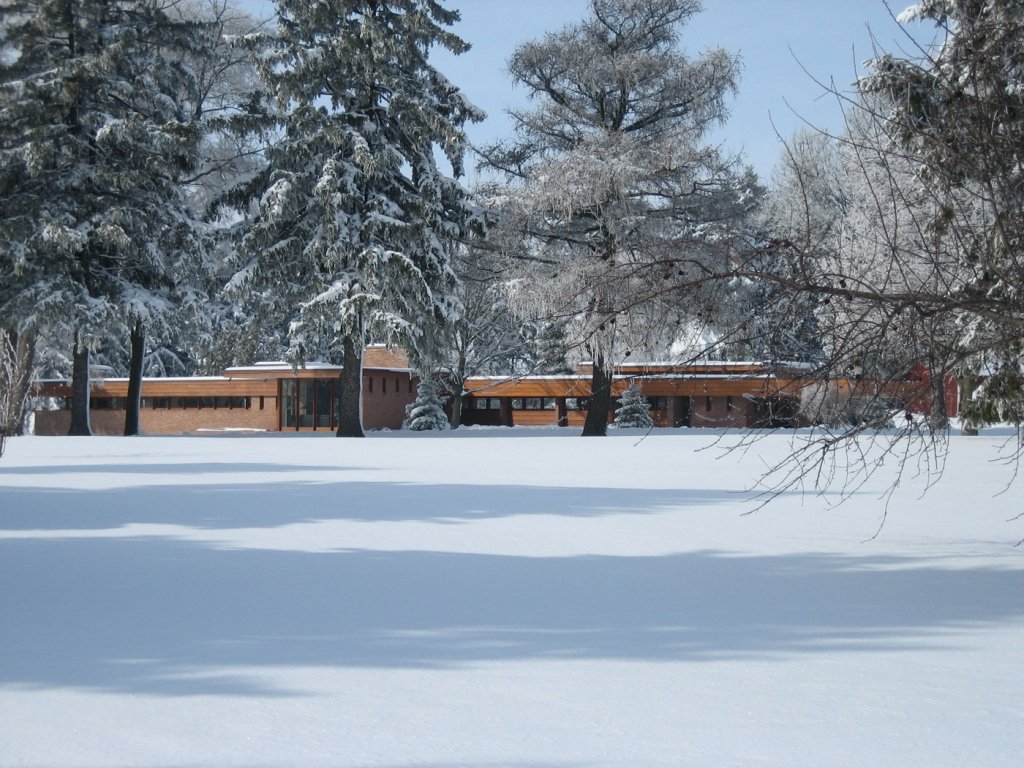 The bucolic site of the Muirhead Farmhouse could have been permanently disfigured if a plan to build large power lines nearby had been allowed to proceed.