RESCUE OF THE ENNIS HOUSE: A PERFECT HOLLYWOOD SCRIPT

The Ennis House project is an extraordinary example of how the Conservancy initiated the cooperation between several prominent preservation organizations and highly influential individuals to accomplish a near-miracle.

The Charles and Mabel Ennis House (1923) was designed by Frank Lloyd Wright for the owners of a Los Angeles men’s clothier. The main house and a second structure connected by a wide bridge and incorporating the garage, chauffeur’s quarters and service facilities, enclose approximately 6,200 square feet. Extensive terraces and the broad motor court add to the expansive footprint of the building that overlooks Los Angeles from its prominent perch in the Hollywood hills. The construction system (textured concrete blocks molded on site with steel reinforcement) presented practical problems from the start. Too much common soil was included in the concrete mix causing the blocks to be less dense than Wright intended and the stepped wall facade allowed moisture infiltration into the blocks and thence to the reinforcement. Water migration contributed to the deterioration of many of the blocks over time.

Charles Ennis died in 1926. His wife Mabel lived in the house until 1936. The house passed through several owners and in 1968 August (Gus) Brown and his wife became the eighth owners. In an effort to finance repairs and maintenance, Brown formed the Trust for Preservation of Cultural Heritage (TPCH), transferred the house to that non-profit and retained the right to live in the house. Brown promoted the house as the Ennis-Brown House and the building was open for tours on a limited schedule and was used as a set for over a dozen movies and numerous commercials and photo shoots.

The quake killed 57 people, injured 8,700 others and caused an estimated $20 billion in damage, making it one of the costliest natural disasters in U.S. history. The Ennis House suffered significant damage, most notably the collapse of large portions of the multi-level terraced retaining wall on the south side of the house, causing fear that the south portion of the dining room might collapse. A Getty Museum grant paid for the installation of steel beams to support the dining area. The Federal Emergency Management Agency (FEMA) ultimately determined that the Ennis House was entitled to $2.5 million in restoration funds as a result of the quake. FEMA designated a project list to be completed within a specified time or the grant would expire.

Then, in 2005, Los Angeles experienced an unprecedented amount of rain. Years of deferred maintenance led to extensive leaks. Excessive storm runoff saturated the hillside on which the house sits, causing the further collapse of the retaining wall. The city was so concerned that it temporarily “red-tagged” the building, preventing anyone from entering it until its stability could be confirmed. It soon became clear that the TPCH board was faced with challenges beyond its abilities to raise the money needed within the time limitation given by FEMA. The TPCH, through no fault of the existing board, had reputation issues lingering from the period when Gus Brown was the face of the organization. Several influential and potentially helpful organizations had quietly established a “hands off” attitude toward the Ennis-Brown House. 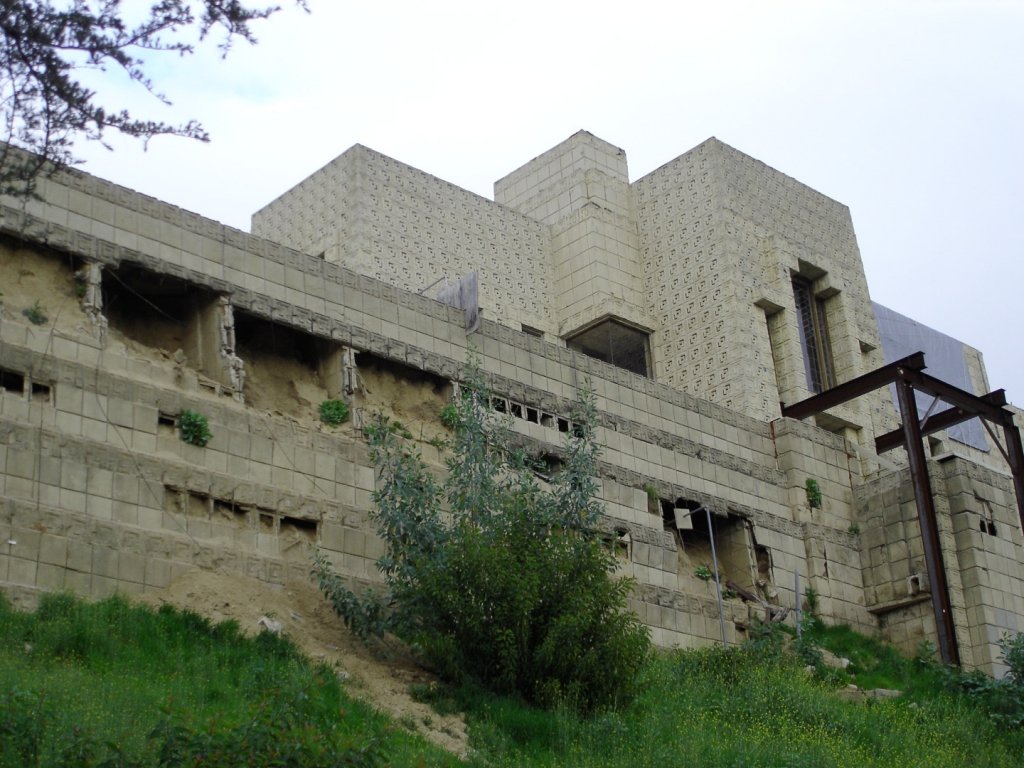 The Ennis House retaining wall prior to restoration 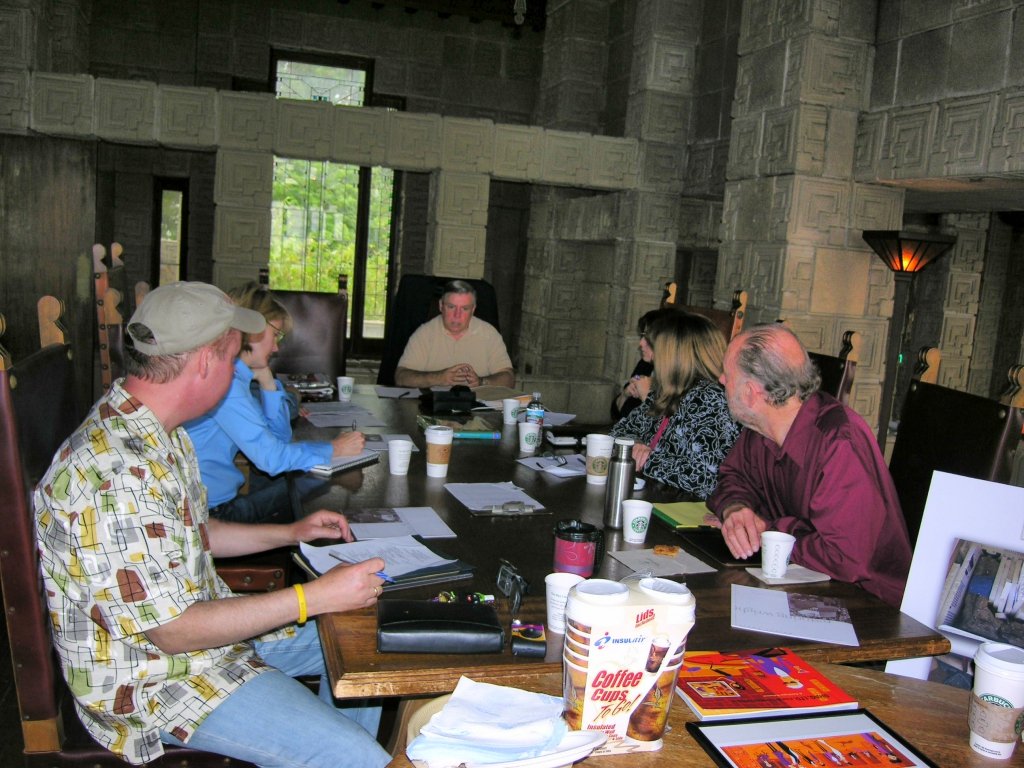 An Ennis House Foundation board meeting inside the house 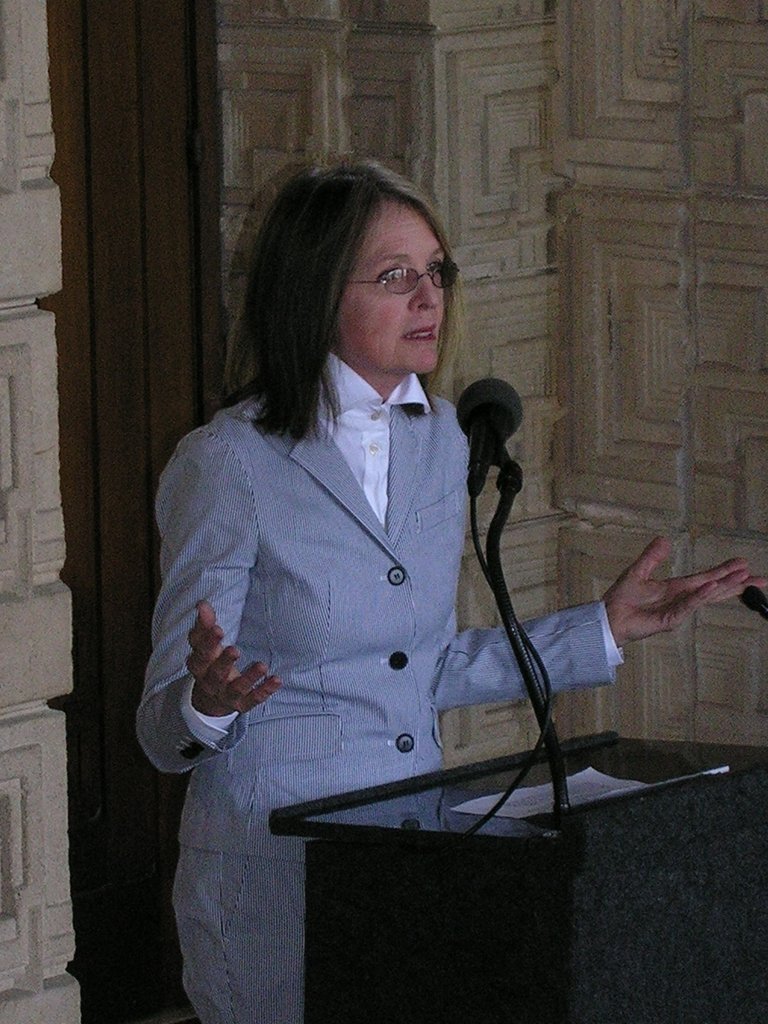 Diane Keaton speaking on behalf of the Ennis House 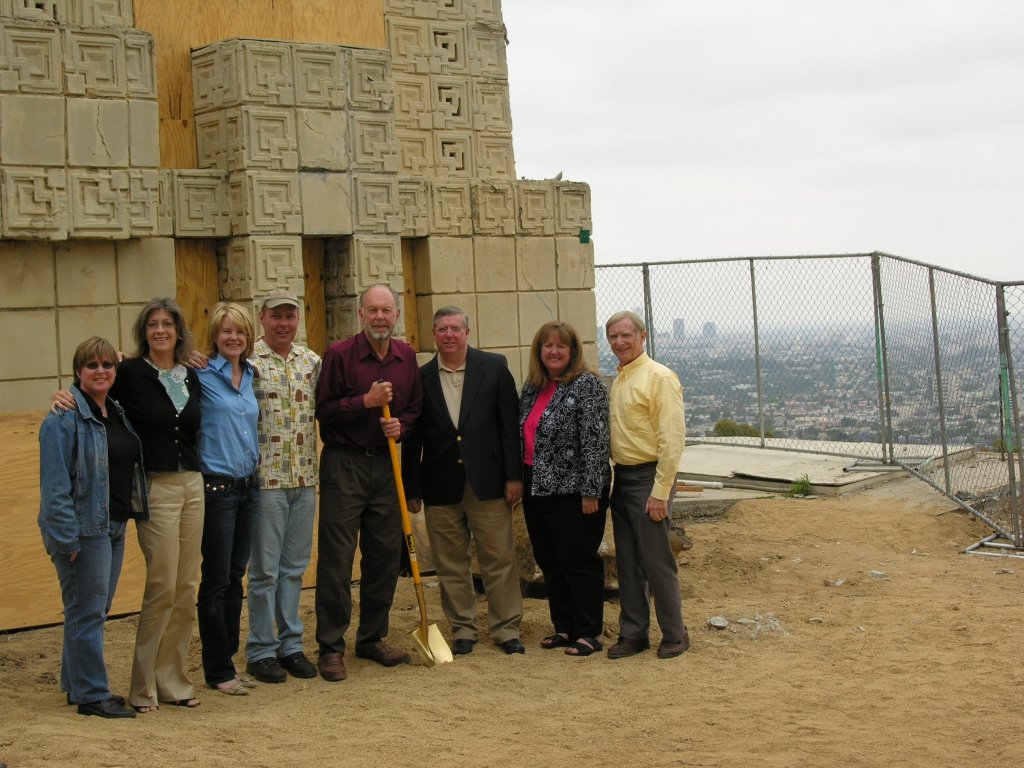 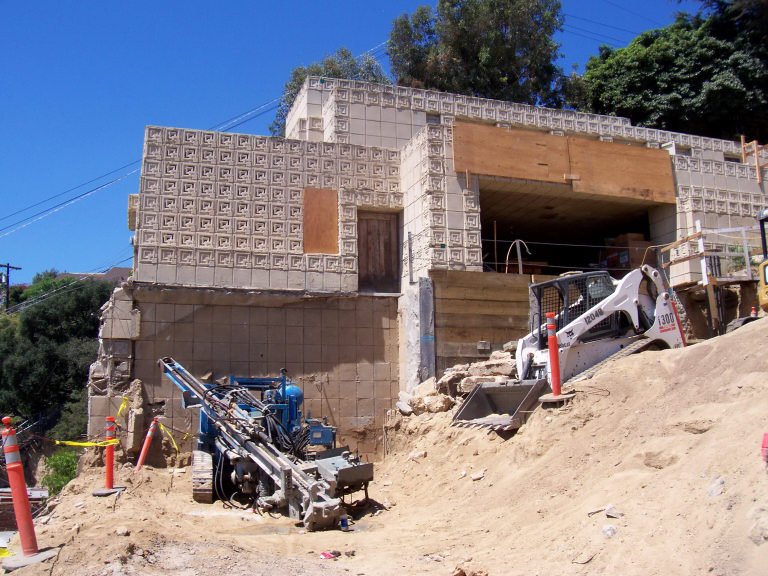 Construction on the Ennis House 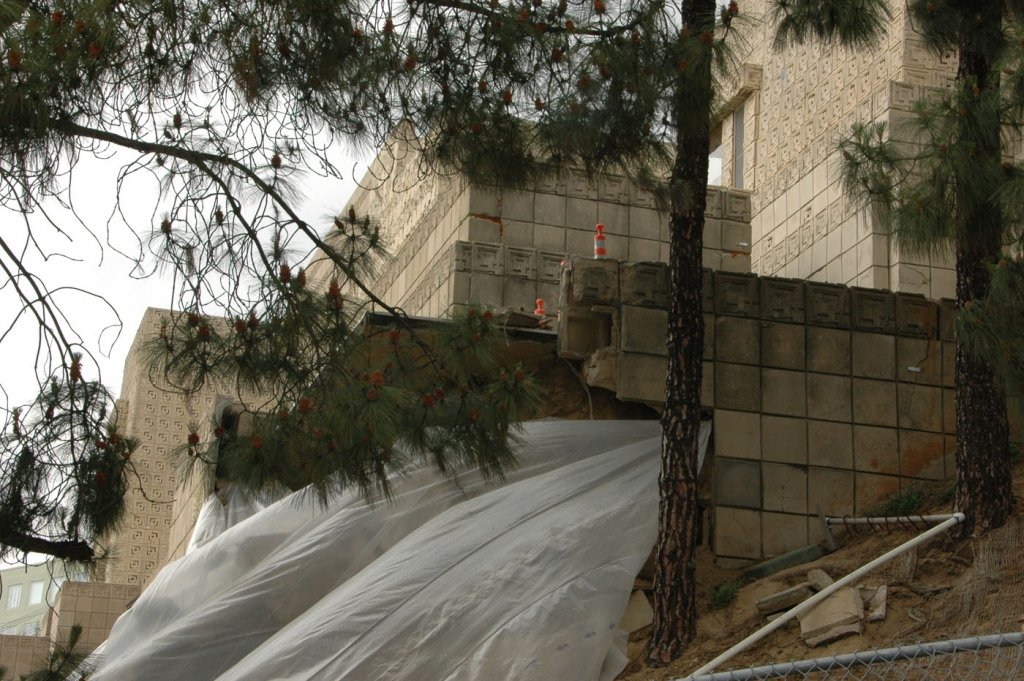 Ennis House during restoration in 2008
Photo by Mark Hertzberg 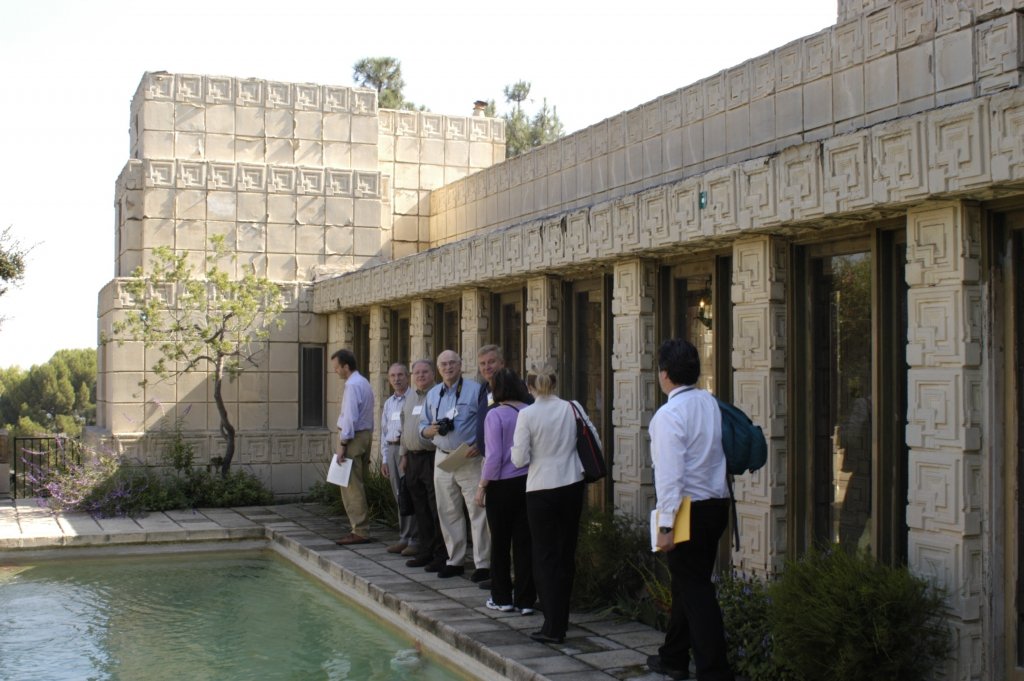 The Ennis House is periodically opened for tours. 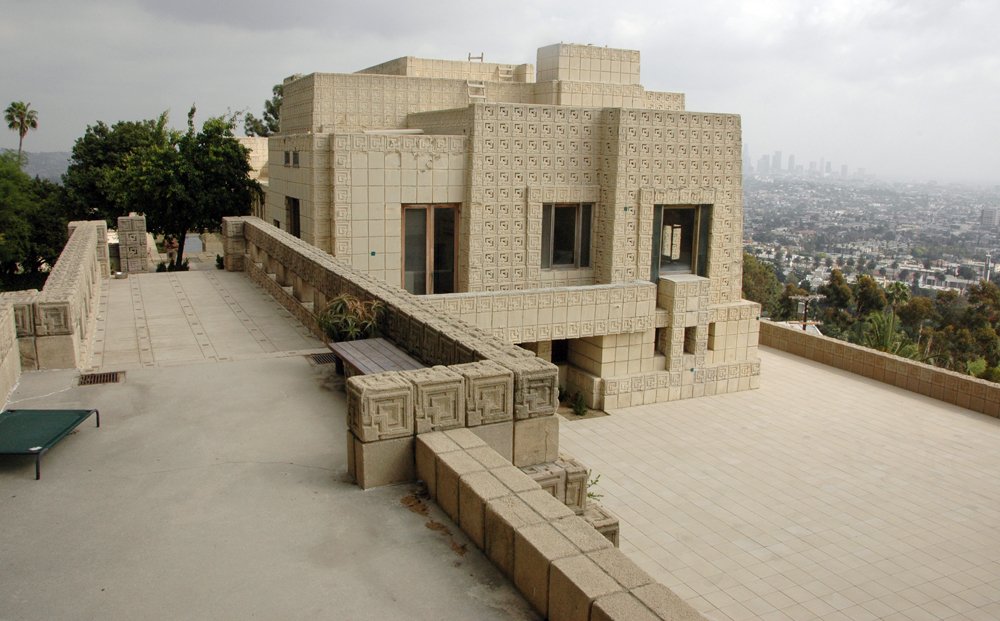 The Ennis House in 2008
Photo by Mark Hertzberg 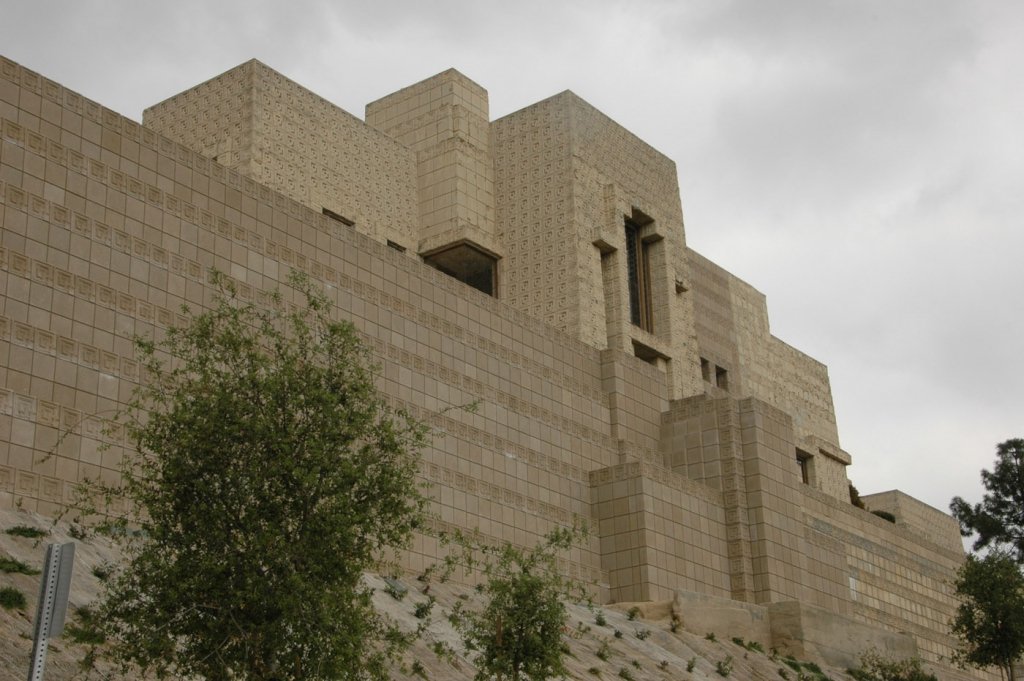 Throughout 2004, Conservancy board members Deborah Vick and Larry Woodin had been making regular trips to Los Angeles as co-chairs of a planned 2005 Conservancy conference. Franklin de Groot, executive director of TPCH, had been attending Conservancy events and discussing strategies for saving the beleaguered building with anyone who would listen. De Groot invited Vick and Woodin to visit the house and meet with board members during one of their conference planning trips. Successive meetings began in earnest. Vick and Woodin tactfully suggested that TPCH consider inviting several new individuals with appropriate skills and connections to join the board. To its credit, the board responded enthusiastically. Several members volunteered to resign and the remaining board members began reaching into the local professional community to seek new members with appropriate connections and skills. Vick, who had contacts within several key organizations, meanwhile brought her considerable negotiating skills to the delicate task of contacting various constituents, explaining the significant risks to the Ennis House and the importance of their participation—lest this iconic treasure be lost. She proposed a roundtable meeting to discuss strategies for moving forward. She succeeded in persuading representatives from the Getty Museum, Los Angeles Conservancy and the National Trust for Historic Preservation to meet with representatives from the Conservancy and TPCH.

As this strategy was evolving, the Conservancy received an invitation to nominate an endangered Wright building to the National Trust’s “11 Most Endangered” list. Executive director Ron Scherubel suggested the Ennis House and with the board’s concurrence the nomination was written by program director Audra Dye and board members Carol Wyant and Deborah Vick. The nomination was successful and Ennis was among the ‘Eleven’ in 2005. Scherubel then suggested that a major media event be held to correspond with the release of the “11 Most Endangered” list and bring widespread attention to the perils facing the house. On June 3, 2005, several media representatives and numerous preservation enthusiasts from the National Trust, Los Angeles Conservancy and the local community gathered in the living room of the Ennis House for the announcement. The Conservancy was represented by board members Jennifer Emerson (owner of the Wright-designed Storer House (1923-1924), Vick, Woodin, and Scherubel.

Actress Diane Keaton, a preservation enthusiast who later joined the Ennis House Foundation board, made an impassioned presentation. She called on the Hollywood community who had gained so much from the use of the Ennis House in films to help save it in its time of need.

She quoted from a 1924 letter from Wright to Mr. and Mrs. Ennis: “You see, the final result is going to stand on that hill a hundred years or more. Long after we are gone it will be pointed out as the Ennis House and pilgrimages will be made to it by lovers of the beautiful—from everywhere.”

While all of this was being carefully coordinated, Conservancy founding president Tom Schmidt and Scherubel met with Hollywood movie producer Joel Silver to discuss the Ennis project. As former owner of the Storer House and current owner of Auldbrass Plantation (1940-1951), Silver was a recognized Wright enthusiast. They considered the impending FEMA deadline and the “image problem” remaining from an earlier era. Silver agreed to present the project to potentially interested friends, provided three pre-conditions suggested by the Conservancy could be met. First, the house should officially be called the Ennis House instead of the Ennis-Brown House; second, the TPCH must reorganize as the Ennis House Foundation (EHF); and third, the new board must contain two representatives from the Conservancy, the National Trust and the Los Angeles Conservancy.

All of these suggestions were immediately put into action, and under the guidance of attorneys identified by the Los Angeles Conservancy, TPCH was legally reincorporated as the Ennis House Foundation. As the new board was created, Schmidt and Emerson became the Conservancy’s representatives. Longtime Conservancy member and supporter Robert Leary also joined the board and was elected its president. He became an essential link between the EHF and the Conservancy, the Los Angeles Conservancy and the National Trust. Eric Lloyd Wright, son of Lloyd Wright and grandson of Frank Lloyd Wright, also joined the board and became an important voice in the project.

During this fast-paced series of events, Silver announced that he was prepared to bring an individual to the table willing to guarantee a $4.5 million line of credit that would allow the work necessary to release the FEMA funds to be undertaken. Los Angeles businessman Ron Burkle had agreed to help. Burkle had a demonstrated interest in architectural preservation. He had previously owned and restored the widely publicized John Lautner designed Elrod House in Palm Springs and was currently living in the beautifully restored Beverly Hills mansion built for silent film star Harold Lloyd. With literally no time to spare, the reorganization was accomplished and Burkle co-signed for the line of credit. FEMA approved release of their grant funds.

Leary and Foundation secretary-treasurer Steve MacAvoy tirelessly worked hand-in-hand with the EHF, the Los Angeles Conservancy headed by executive director Linda Dishman, and the National Trust, represented by its west coast director Anthea Hartig, and scores of dedicated volunteers to steer the project through the many challenges it faced. Construction continued from mid-2006 to mid-2007 and included building a new structural frame to support the motor court, chauffeur’s quarters, and the collapsed south retaining wall. The project also replaced the roof; repaired and restored interior woodwork, floors, ceilings, art-glass doors and windows, and a mosaic glass tile mural.

Nearly 3,000 of the home's 27,000 concrete blocks were repaired or replaced with new blocks that were cast from the original molds.

Despite diligent efforts over several years to establish the restored Ennis House as a museum, the EHF ultimately determined that “the site needed more resources than could be generated by a small not-for-profit” and the best result would be to return the building to its original use as a private home. After considerable marketing efforts the Foundation was fortunate when Burkle offered to purchase the house in the summer of 2011. His experience in historic restoration and enthusiasm for the Ennis House ensured a thorough, high-quality completion of the many restoration tasks. The Los Angeles Conservancy holds a preservation easement on the property.

We can now be confident that Wright’s statement to Charles and Mabel Ennis will hold true, “…long after we are gone it will be pointed out as The Ennis House and pilgrimages will be made by lovers of the beautiful—from everywhere.”