David and Gladys Wright House in Phoenix Targeted for Development

The house Wright designed for his son and daughter-in-law is placed on the market without protections from demolition.

On Sept. 1 the David and Gladys Wright House in Phoenix, Arizona, was listed for sale. It is on the market to any buyer who will pay $12.95 million for the 5.9-acre property in Phoenix’s Arcadia neighborhood.

As we saw in January with the demolition of the Lockridge Medical Clinic in Whitefish, Montana, when Wright-designed properties fall into the hands of the wrong buyer, they can be lost despite public outcry and the best efforts of advocacy organizations. The destruction of the David and Gladys Wright House would result in an irreversible and devastating loss to the canon of American architecture—comparable to the demolition of Wright’s groundbreaking Larkin Building in 1950.

Since 2012, the Frank Lloyd Wright Building Conservancy has been heavily involved with saving this important building from the hands of developers who initially planned to demolish the house to make way for two large houses. Read the full story up to its 2014 purchase here.

Despite tireless efforts to secure the protection of the house through local landmarking, and a historic preservation application pending since September 2015, the house remains legally unprotected.

The house sits in the middle of a neighborhood that continues to transform with new development. Unless a preservation-minded buyer comes forward who can meet the seller’s asking price and finalize the application for landmark designation, this important Wright-designed house is a prime candidate for being torn down so the valuable land can be redeveloped into multiple new-construction homes.

In June 2017, the current owner announced that he would donate the house to the School of Architecture at Taliesin (SOAT), if they could raise $7 million for its preservation and operating endowment. On June 25, 2018, it was announced that the partnership with the owner and SOAT was called off.

Following the announcement this summer, the owner made the decision to sell the property. 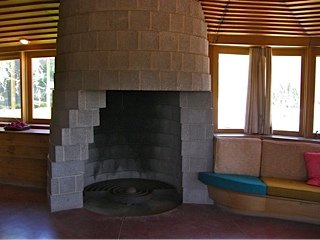 The Conservancy is working with local preservation partners to coordinate efforts and reaching out to potential preservation-minded buyers. In the meantime, we are asking our constituency for assistance in helping to draw attention to the urgency of the situation.

The destruction of the David and Gladys Wright House would result in an irreversible and devastating loss to the canon of American architecture—comparable to the demolition of Wright’s groundbreaking Larkin Building in 1950.

The significance of the David and Gladys Wright House

Preeminent Wright scholars have recognized the importance of the David and Gladys Wright House among Wright’s works. Neil Levine described it as one of Wright’s most innovative, unusual and personal works of architecture. Built for his son and daughter-in-law in 1950-52, it is the only residence by the world-famous architect that is based on the circular spiral plan of the Guggenheim Museum in New York, whose construction followed it by six years.

When the house was first published in 1953, it was stated that “no other Wright house since Fallingwater” was as praiseworthy and remarkable. Since then its reputation has only increased. The spatial design, the processional movement through the patio and along the encircling ramp, the custom-designed concrete-block detailing, and the total interior design all give this house a spectacular expression entirely appropriate to the desert environment of the region. Wright’s original drawing for the house described it as a response to “How to Live in the Southwest.” It is one with its site in both the specific and general senses of the word.

Update: In August 2020, the David and Gladys Wright House was purchased by a preservation-minded buyer who, later that year, donated an easement protecting the house.

The Frederick Bagley House (1894) is listed for sale with no legal protections to...