Living in a Work of Art: The Seamour and Gertrude Shavin House

“Living in a Frank Lloyd Wright home is like living in a piece of sculpture,” my future husband, Jeff Crabtree, said facetiously the first time he visited the Frank Lloyd Wright House that had been my childhood home. That was so many years ago now, and I remember how much that remark surprised me. It had never occurred to me that there was a price to pay for the privilege of living in a beautiful space.

Having grown up in the Seamour and Gertrude Shavin house and then moved on to live in a more traditional two-story row house, I have had the opportunity to understand and reflect upon the meaning to my life of growing up in a work of art which was also my own family home. I soon realized that my ‘normal’ was not the same as the normal of most other people, and that the fundamental perception of what a home should be was the base of this difference.

In my mind’s eye I am small and the house is large. Growing up, there was no space for excess. When I go back now, the Shavin house is even smaller than I picture it. Our wardrobes were minimal and we didn’t have a lot of toys. Books and musical instruments were the only ‘extras.’ Even with these minimal possessions, my small bedroom would appear cluttered quickly. My mother was quick to remind us to clean up. Thankfully, I could reach most of the things in the room from my bed. Now, as I look around the house, I understand her desire to not interrupt the pure lines of the house with ‘stuff’. 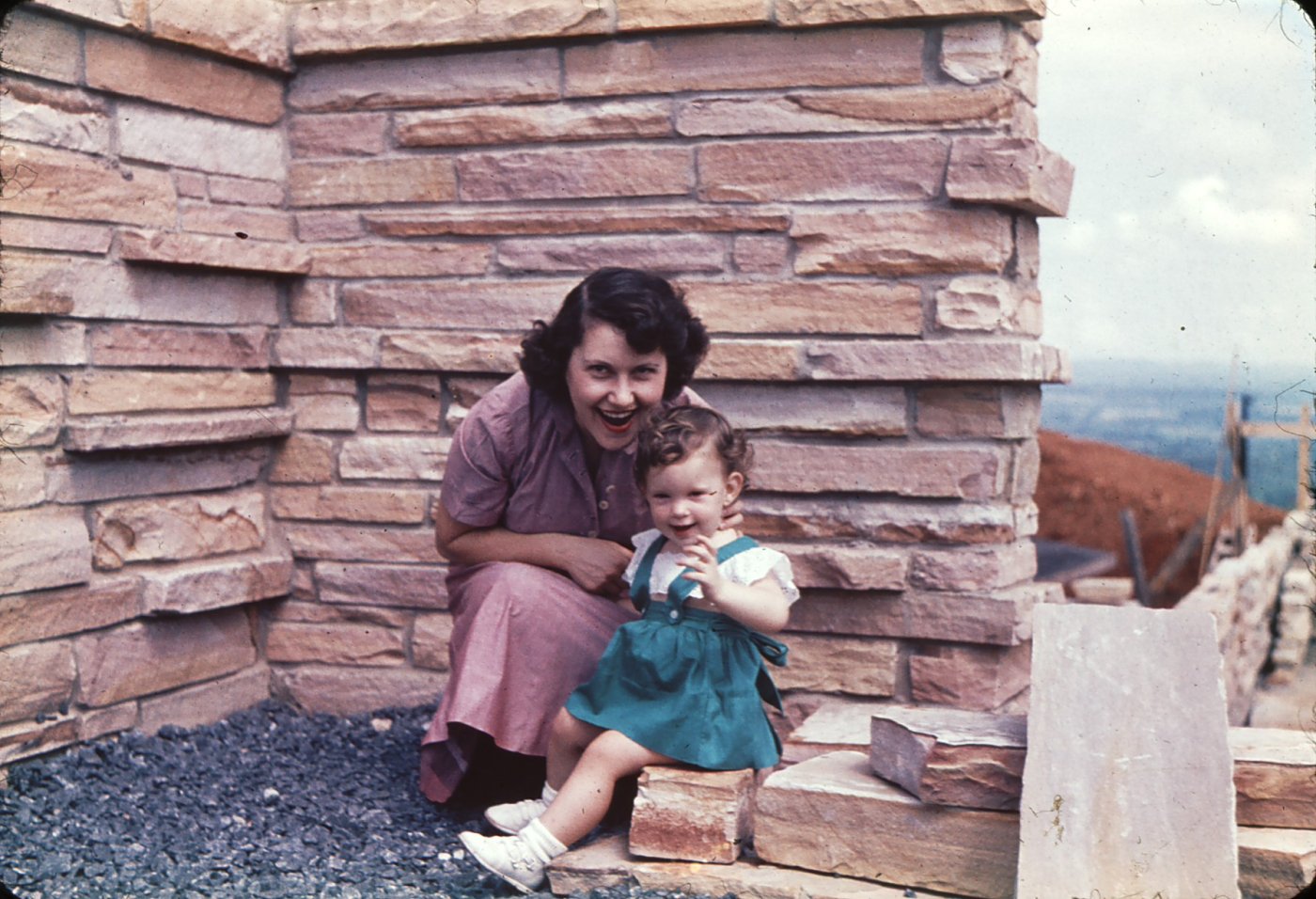 Karen Shavin, age 2 with her mom Gertrude Shavin, on the building site for the Frank Lloyd Wright-designed Shavin House. “As a two-year-old my playground was a construction site, hiding behind free-standing fragments of stone walls.”

I remember the battles every evening, especially the never-ending task of cleaning up in the kitchen after dinner. My brothers and I had an assigned schedule to do the dishes (which simply meant putting them in the dishwasher and wiping down the counters.) My father’s job (with him grumbling as well) was to vacuum the crumbs caught in the score lines on the floors. Every evening it was the same: put things in order for the next day. The house to appear perfect. Always.

Now, in my adult home, a two story row home about the same age as my childhood Frank Lloyd Wright home, the need to clean is still there but it does not feel as urgent. Projects stay out until they’re finished. It is a more relaxed form of living that I did not know existed when I was growing up. We do not have to live up to the house. Since the pandemic, rooms are vessels for projects. When the work is done the room is cleared for the next project. Since the room itself is of no particular interest, the projects become the center of interest.

Then – Connected and Expansive

Thankfully, the inside of my childhood home opened to the outside, giving the illusion of having no boundaries. Most of my time was spent in the yard playing with my cousins who lived next door, or wandering in the nearby woods. If I wasn’t outside, I would read in my room, the only private space I had. When I wasn’t reading, I would study the patterns in the wood, how the wood met the stone, the irregular spacing of the stone, or simply reflect on the patterns the sun made on the walls. I now know this was a form of meditation. My world was limitless through imagination and adventure.

There were no locks on the interior doors (except for the bathrooms). The doors were almost always open. There were no curtains on the windows, at least by my teenage years. The sun and clouds created living artwork on the wood and stone. The rains created waterfalls as the water freely gushed through the scuppers in the roof, without containment from downspouts. The windows framed the views, calling attention to beauty that might have been lost in the vastness had it not been contained. 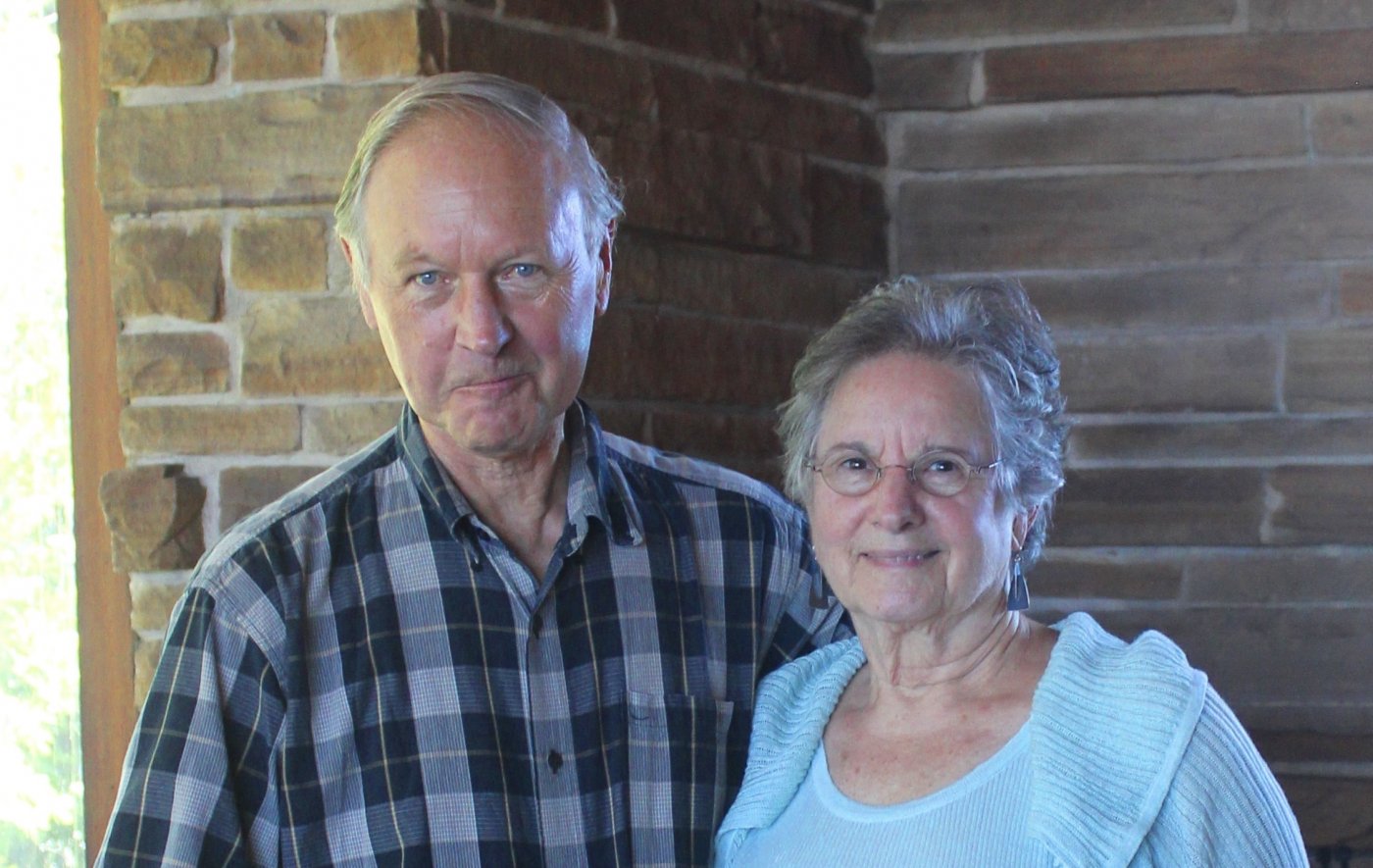 Karen Shavin (right) and her husband Jeff Crabtree visiting the Shavin House in 2020.

The open spaces also meant no need for an intercom. You could communicate in a normal voice and be heard throughout the house. My dad would sit in his den while we practiced our music in the living room. Frequently you could hear him calling out ‘flat’ when the intonation was not correct. No need to move from his desk, he could easily multi-task. And when he came home from work late at night, after I was in my bed, I could hear him coming down the long hallway. As I pretended to sleep, he would tiptoe gently into my room and give me a good night kiss.

Whether it’s a temporary limitation as a result of the pandemic or an effect of suburban life, my adult life seems disconnected from the outside. Attention is directed inwards – inside the house, inside the rooms, inside the self. When I do get outdoors there is still that sense of exhilaration, as if a weight has been lifted and I can expand from the contraction of being inside. My adult home has much more privacy and much less opportunity for communication. Today, in my more contained home, I find myself standing at the foot of the stairs calling the family to come for dinner. When there is no response, I send a text or, more recently, a Google announcement that dinner is ready.

Over seventy years later I still feel this connection with my family’s Frank Lloyd Wright-designed Shavin home that changes how I interact with my current environment. I look for beauty in ordinary places and gravitate towards natural materials. I am most at home in nature. I prefer to get up with the sun and go to sleep when it sets. I abhor schedules and appointments that interrupt my thoughts and activities. My greatest joy is to experience beauty in the natural world. I am talking about peace through architecture!