In 2020, the Conservancy remembered its founding 30 years ago with a look back at early issues of our newsletters. September 1990 marked the second issue of its quarterly Bulletin.

Beachy House in Oak Park, Illinois, was severely damaged by a fire in 1990 (see page 7 above). Former owner Gabriela Freese shares memories from nearly three decades in the house, including during the post-fire restoration.

We spent nearly 30 years in the Beachy House, from 1977 to 2004. We began as starry-eyed new homeowners and accepted all the changes, ‘improvements’ and ‘modernizations’ as we moved in with our two children. We turned the house back from a two-flat into a one-family home and quickly realized that the shag carpeting and the upstairs pink kitchen had to go.

Still, the generous spacing and beauty of the dining and living room that extended into the covered porch, easy access to the garden, the big trees, it felt like the most comfortable and private place anyone would ever dream of to live in. We loved the house, pink baths and all.

The neighborhood offered great schools. My dental practice was just blocks away though my husband commuted to the University every day.

The changes in the weather brought along surprises to deal with, like drippy leaks. From the get-go we restored what needed it the most. We also found out where certain pieces of the dining room were and brought those back to the house, including a complete set of 8 small dining room chairs (covered in flowery material). The set of 8 tall dining room chairs are duplicates we had made in Grand Rapids, but we had all three dining room tables back where they belonged (the large dining room table had not been removed but instead used as a ping pong table in the basement, rescued from that fate by John Tilton while he and family lived in the Beachy House).

Among other finds were two upstairs fireplaces. One was covered up by plaster board, the other was ‘updated’ to a 1950’s look, covering up beautiful brickwork. A big day of celebration was when we hung up the ‘Wright’ light fixtures over the dining room table, their amber glow being the perfect accent to the room. What a huge difference that made! 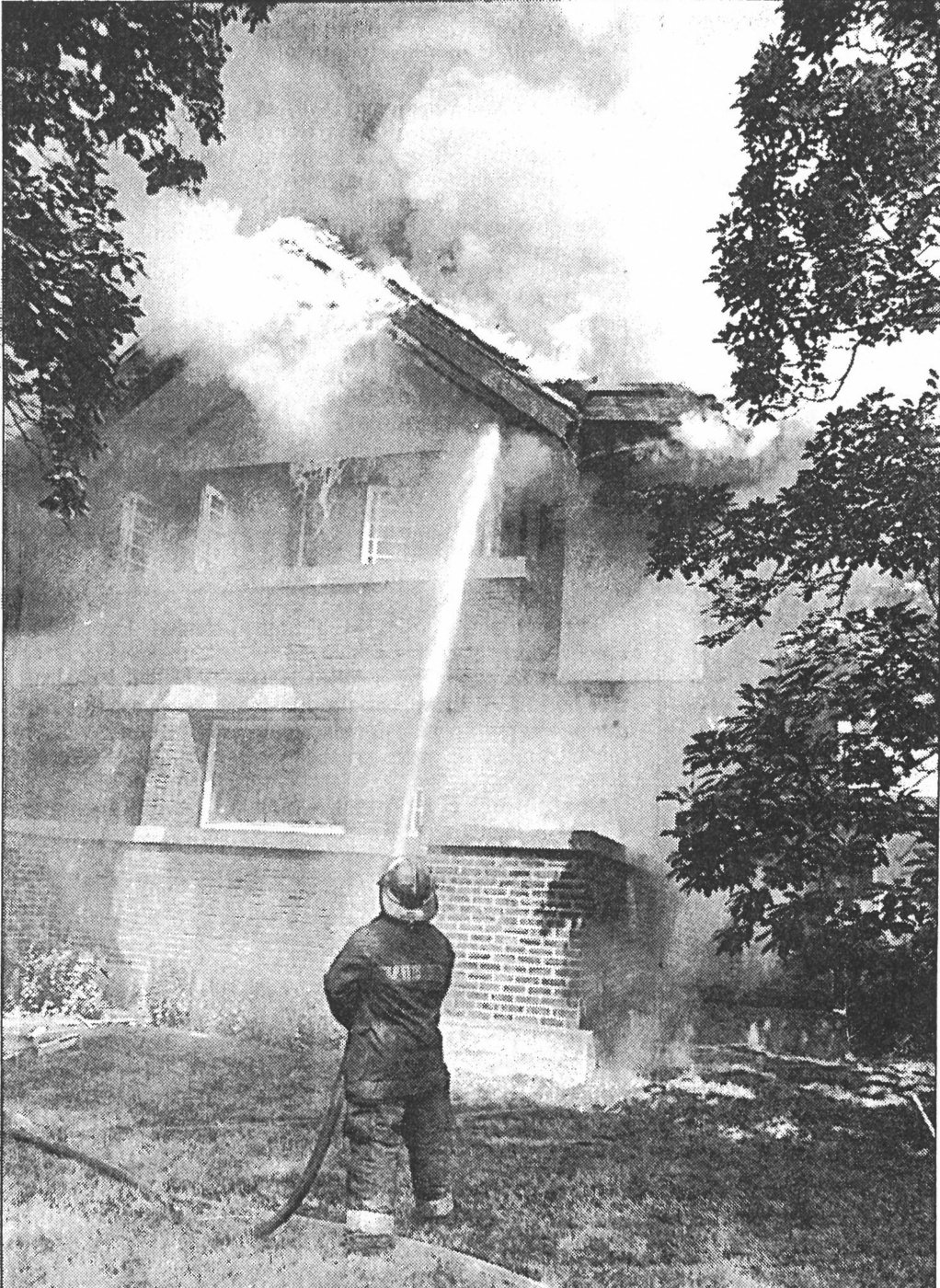 We had been exploring, learning, restoring for many years before the fire of 1990. With each step taken the house grew dearer to us, we were making it ‘our’ home while it was a treasure of much larger significance to the world of Frank Lloyd Wright. This destructive fire showed us that there were no fire stops between the walls, that the electric system still had free hanging cables and tubes, and we could stand in one spot in the basement and look up to the sky.

During the months of working, planning, consulting, digging for pots’o’gold, being tired of sweeping a path through debris, taking mountains of photographs, our lives continued: kids were back in school, we were back at work.

After one arduous year of continuous work and noise, it was done. The house was good as new: new roof, new electric, new piping in places, new floors, new doors, the splendor restored. 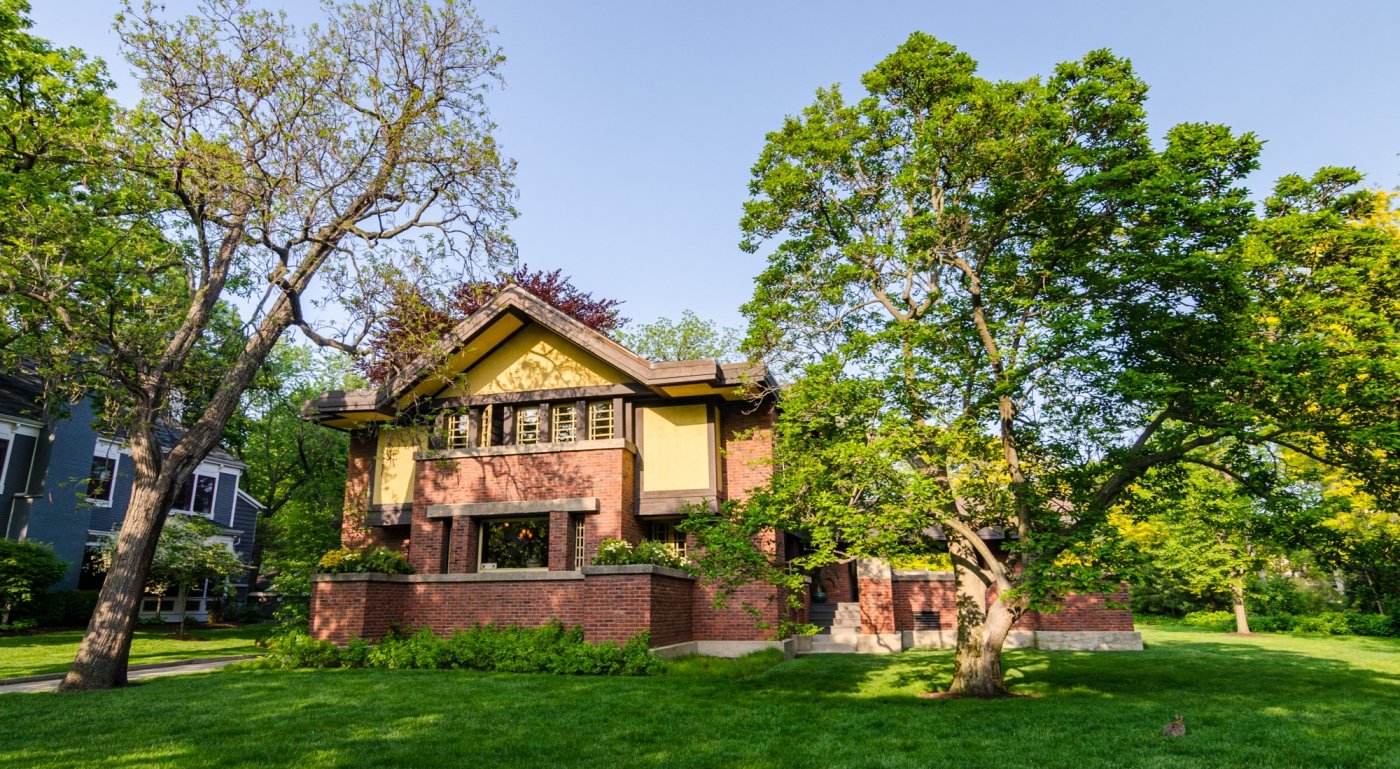 We threw a big BBQ for all the people that had helped us, neighbors that had supported us, workers showing such pride in their work, and everyone toured the ‘new’ Beachy House, including the newly formed Conservancy, then led by Carla Lindt.

I don’t have to mention how hard it was to move out of this very special home. The new homeowners are just as good stewards as we were, which made it easier for us to move on, leaving ‘our’ home in their good hands. But I feel as if it were my home too. Still.

Thirty Years After the Restoration of Dana-Thomas House

Thirty years ago the Dana-Thomas House (Springfield, Illinois) reopened after a $5.2m restoration. The Bulletin (above) presented differing viewpoints on the treatment of furniture in the restoration. Dr. Donald Hallmark, who retired in 2009 after 28 years as the first site superintendent, recently shared these reflections with us.

In the past few years many of our sites have struggled with decreased budgets, large cuts in staff, and attempts to reorganize public and private institutions, making them into “more efficient” operations. The State of Illinois’ historic sites lost most of their educationally trained historic site administrators to retirements. This makes some of us even more aware of the special nature of our sites thirty years ago when the Dana-Thomas House reopened after its five million dollar restoration, which lasted several years in three separate phases.

For us, the “miracle” was having a sympathetic and interested governor, James R Thompson, who was both an antique collector and a history devotee. During those years he showed great support for all of Illinois’ historic sites and wanted each of us to keep him informed of our progress as well as our potential problems. He was able to maintain our restoration project funding from the legislature, and personally fund-raised whenever we discovered a “lost” artifact that had left our Dana House collection from previous ownerships.

Those were indeed “golden days,” when on three different occasions in the 1980’s and 1990’s, we were successful at Christie’s in New York City in purchasing major groups of items (FLLW drawings and several original pieces of furniture, a copper urn, and art glass lamps). The excitement of returning those items to our newly restored house museum was a wonderful experience for many of us on staff, our many dedicated volunteer interpreters, our supporting Dana-Thomas House Foundation, the public, and for a unique governor who devoted time and energy and enthusiasm to our project. I doubt that anything quite like this could happen in today’s world, given the COVID-19 epidemic and the state of our national politics. We can only count our historical blessings for that special time from thirty years ago.

Members are now receiving the latest edition of SaveWright magazine, focusing on...