In the last forty or so years of observing, the comment I have most frequently heard from Frank Lloyd Wright homeowners is, “We see something new every day at our house.” This observation became so frequent that I began pondering it in more depth, and realized that more often than not, the person was talking about the relationship of the house with nature — architecture and nature — and usually the observation had to do with light, be it the sunlight moving through the house during the day, or oftentimes the change in the angle of the sun with the seasons, revealing different aspects of the architecture.

Since 1982 I have been observing my house, the Archie and Patricia Teater studio (aka Teater’s Knoll) in this regard. Teater’s Knoll is actually not even a house, but is an artist studio designed by Wright in 1952, for landscape painter Archie Boyd Teater, in Bliss, Idaho. It is a one room studio that doesn’t actually have a bedroom — a sleeping area is partitioned off the main studio space. As an artist studio, Teater’s Knoll is of course all about light;  Wright’s use of the equilateral parallelogram module, meaning that the studio has six walls instead of four, greatly enhances the richness and diversity of this light. Three big bays of windows illuminate the main studio space, and Archie chose a spot at the north end of the room to set up his easel and drop cloth to take advantage of the uniform ‘artist’s light’ it provides. The largest window bay faces west, overlooking the Snake River below and the Owyhee Desert beyond. As the sun progresses through the day into the afternoon and evening, it begins to shine into the studio, ever more deeply, animating the interior space. Two large elm trees and a smaller maple cast intermittent shadows on the floor, and if the wind is even slightly blowing, their shadows dance on the concrete floor. Finally, as it is setting over the west rim of the canyon, two miles away, the sun is illuminating the east wall of the studio with lively shadows. The color of the light has now become golden, highlighting the bronze sculptures created by my late wife, Lynn Fawcett Whiting, which rise in the center of the room, as well as the Japanese ceramics which sit on the triangular artist work table Frank Lloyd Wright designed for Teater’s Knoll. The light-show changes throughout the year as the sun angle changes: a different part of the studio is illuminated during the winter than in the summer. And at certain times, when conditions are just right, the sun will reflect off the surface of the water in the Snake River, 300 feet below, and project onto the ceiling boards and rough-sawn 4 X 12 beams, illuminating this surface in a glorious dance of light. If I look closely enough I can actually see the surface pattern of riffles in the moving water projected onto the ceiling. 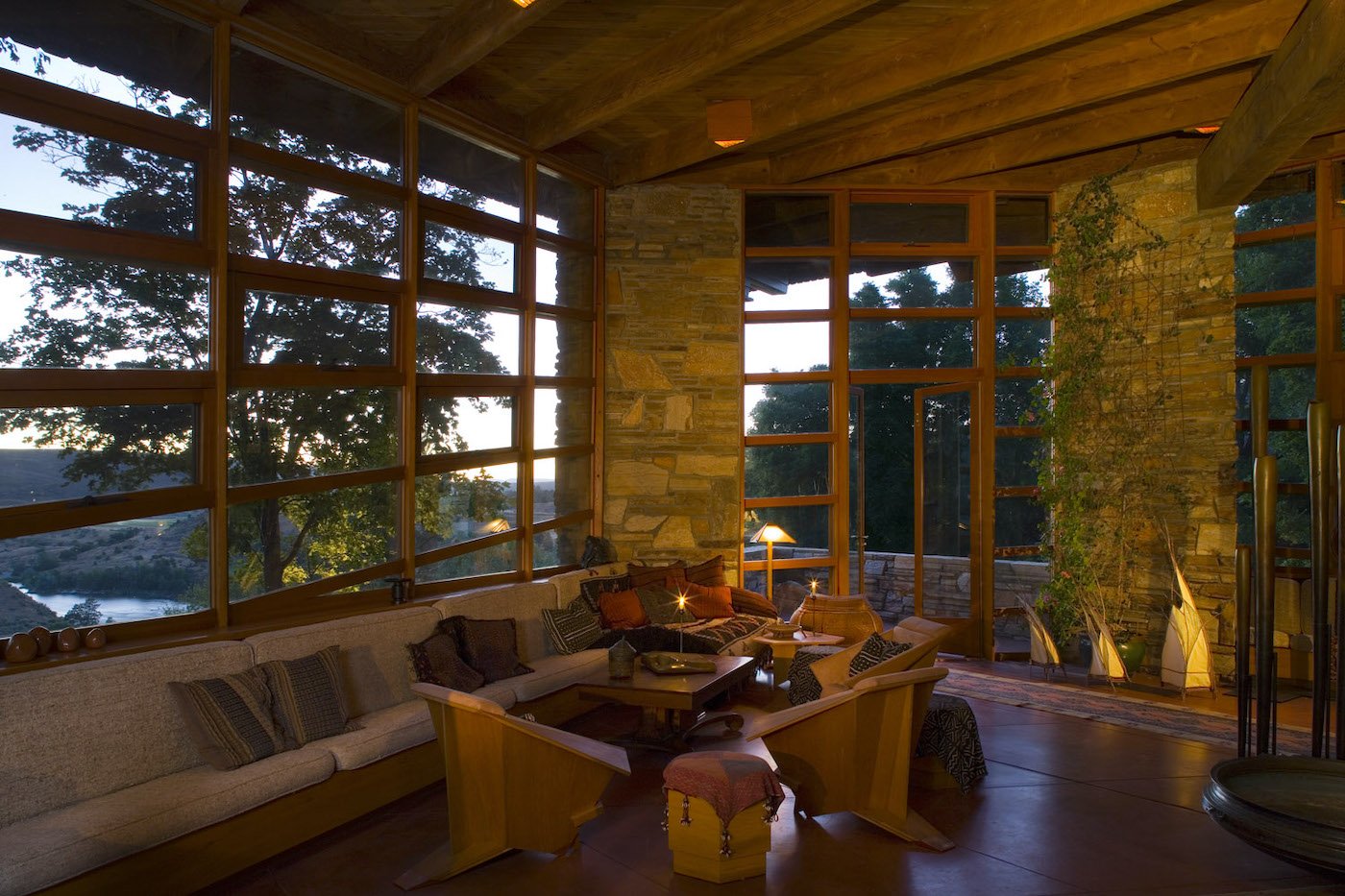 My reading chair sits with its back facing the west windows, and as the coronavirus situation has dictated, I find myself spending ever more time in this chair. As beautiful and dynamic as the view of the Snake River Canyon is, I have found over the decades that I prefer to sit and observe the light inside the studio rather than outside in the landscape. Oftentimes, as the evening light turns golden and penetrates further into the studio, I find that it becomes virtually impossible to read, so sublime, distracting and dynamic is the light. It reaches its climax as it fully illuminates the east wall of the studio, then poof, as if the theater lights have gone out at the end of a Broadway play, the sun has gone below the far rim of the canyon and everything has gone enigmatically silent and still, as ephemeral as the blossoms on a Japanese Cherry tree.

I live about 100 miles south of the 1,400 square mile Central Idaho Dark Sky Reserve, nevertheless, there is virtually no ambient light in the night sky at Teater’s Knoll. Across the river from me are hundreds of square miles of mostly uninhabited desert. The Milky Way is not only visible every clear night, it is so vivid that it looks as though I could reach up and touch it. Living in such a dark environment, I am unavoidably aware of the cycles of the moon. The new moon is my favorite, each month I look forward to its initial appearance. It appears first as a tiny sliver with its dark side clearly visible, high in the western twilight sky of colors ranging from yellow to orange, turquoise to indigo. As the moon cycle progresses, the moon grows larger and larger until it becomes full. At this point it shines brightly into the studio. Because I have no curtains, shadows created by the window frames are cast on the floor, continually moving throughout the night. And if I look outside at the proper time, I can see the moon reflected off the waves of ‘Frank Lloyd Wright Rapid’, as the Snake River comes cascading toward the studio in a flow of molten silver.

Soon after the full moon stage, I get up early in the morning to see the moon, huge, hovering just over the western rim of the canyon like a cosmic spotlight. After it sets, the golden line of the sunrise begins to appear on the wall of the canyon, descending downwards as the sun rises – and the whole cycle begins anew. 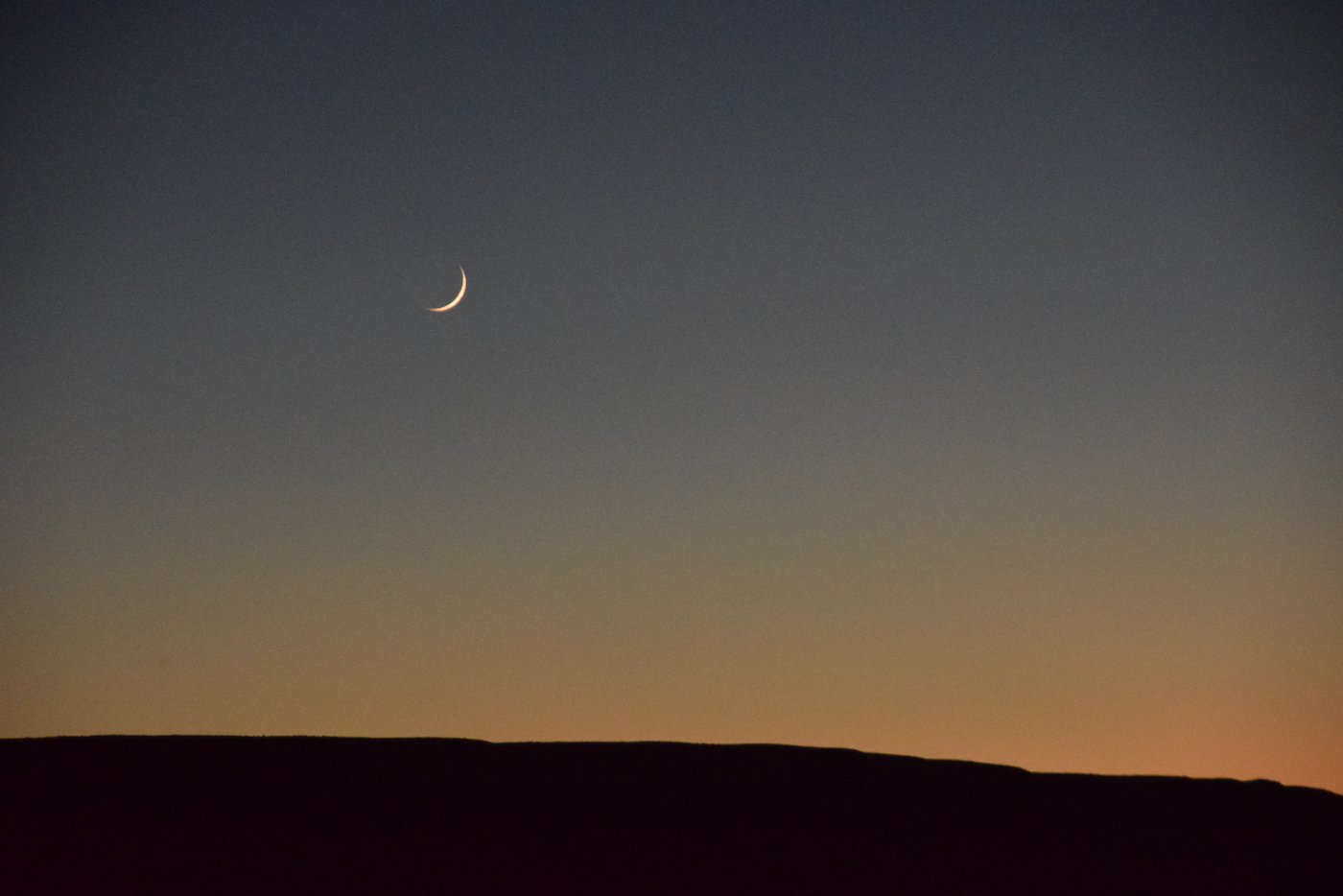