Frank Lloyd Wright Building in Montana Demolished Despite Efforts to Save

UPDATE: The building was demolished after hours on Jan. 10, less that two hours after final terms of an offer to buy the building were rejected. Montana Public Radio has video of the demolition.

For background up to Jan. 8 please see our previous news post, “Efforts Underway to Save Montana Wright Building by Jan. 10.”

On Jan. 8 a full-price offer to purchase the building was submitted to Whitefish attorney Ryan Purdy, the legal counsel for building owner Mick Ruis. The offer was submitted by 341 Central LLC, which was formed by the Frank Lloyd Wright Building Conservancy (FLWBC) in Chicago, IL, specifically for the purpose of saving the Lockridge Medical Clinic building from demolition. The offer provided for a substantial refundable deposit paid directly to the owner with 60 days to close on the full $1.7 million asking price, and the ability to conduct inspections on the property, which had already undergone an undetermined amount of interior demolition work.

On the morning of Jan. 9, the building owner replied to the offer through Purdy with a demand for a 50 percent greater deposit that would be entirely nonrefundable and must paid by 5 p.m. MT on the very same day. Further terms stated that 341 Central LLC would have until only Jan. 22 to pay the remaining $1.7 million purchase price, and there would be no reasonable time frame for buyer inspections on the building. Fencing was installed around the building and crews chopped down surrounding trees, prompting concerns that, without inspections, a potential buyer may not know how much of the interior had already been removed.

As negotiations continued under these increasingly unorthodox terms, FLWBC and its allies attempted to raise the full nonrefundable deposit amount within the near-impossible time frame set. With public support for preserving the building growing, evidenced by numerous phone calls and emails from concerned citizens, on the afternoon of Jan. 10 FLWBC offered to submit a substantial portion of the nonrefundable deposit by the close of business on Jan. 10, and requested one more week to allow FLWBC to launch a crowd-funding campaign to raise the full deposit amount requested on Jan. 9. This offer was rejected at 4:15PM Central time on Jan. 10, as was a subsequent request to salvage architectural elements of the building prior to or during the demolition process.

“The board of directors of the Frank Lloyd Wright Building Conservancy agreed the owner’s proposals provided no realistic path to acquiring the building, short of an investor willing to put down $1.7 million cash without reasonable time to complete their own due diligence on the property,” says Barbara Gordon, executive director of the Frank Lloyd Wright Building Conservancy. “We certainly attempted to make that happen alongside many other options we explored in the incredibly brief window of time we were given to find a new solution. Complex commercial real estate transactions don’t happen overnight, and we believe a realistic offer was submitted to the owner by his deadline that would allow the organizations working to save this building to continue to fully finance its purchase. We in the preservation community are all incredibly disappointed by this outcome, to say the least.”

For more than a year preservation organizations including the Montana Preservation Alliance and the Frank Lloyd Wright Building Conservancy have been working to put a deal in place. The owner’s plans to demolish the building first surfaced in November 2016. Through the extraordinary efforts of a local businessman, a buyer had been found to purchase the building, but that buyer needed to close another deal before they would have the capital to complete the purchase.

“It was communicated to all of us through our local contact working to broker the deal that the developer would not move to demolish the building until late 2018, by which time we expected the intended buyer to have their financing and complete the purchase,” says Gordon. “None of us are aware of why the owner changed his mind and moved up his demolition plans. It left us all scrambling to find a new cash buyer at the last minute. When none could be found, we made several appeals to the owner for more time to mobilize the many small donors from the public who contacted us wishing to contribute whatever they could toward saving the building, but he would not grant any more time.”

The Conservancy and its local allies including the Montana Preservation Alliance first learned on Jan. 3 that preparations for demolition on the building had begun. The next day Purdy communicated that the owner would postpone demolition if a cash buyer came forward with $1.7 million by Jan. 10. National media interest, direct engagement with a variety of potential cash buyers, and pleas to Montana Governor Steve Bullock, Secretary of the Interior Ryan Zinke, and U.S. Senators Jon Tester and Steve Daines followed, but no buyer or consortium could be assembled to submit the full $1.7 million cash in the very narrow window of time with no inspections.

If demolition is completed, the Lockridge Medical Clinic building will become the first viable Wright-designed building to be demolished in more than 40 years.

In recent years other Wright designs have been lost, including the interior design for the Hoffman Auto Showroom (1954) in New York City, which was gutted without warning by the building owners just as the process for its designation as a New York City Landmark was begun. In 2006, the Wynant House (1917) in Gary, IN, burned as a result of years of neglect. In 2004 the heavily altered W.S. Carr House (1916) in Grand Beach, MI, was demolished.

Previous demolitions date back to the 1970s, including the 1974 demolitions of the Francisco Terrace apartment building (1895) in Chicago, IL, and the Munkwitz Apartments (1916) in Milwaukee, WI. In 1972, the Little House II (1912) in Wayzata, MN, was demolished. Several interior spaces of the prairie-style house were salvaged and are on display in major art museums, including the Metropolitan Museum of Art in New York City.

“This devastating situation underscores the vulnerability of all Wright-designed buildings that don’t have some form of legal protection,” says Gordon. “A lot of people think a building listed on the National Register of Historic Places, as the Lockridge Medical Clinic was, or a private house that isn’t protected by a preservation easement or local landmark designation, can’t be demolished, but that is not the case. Most preservation work happens on the local level. The Frank Lloyd Wright Building Conservancy encourages concerned citizens to advocate for strong local preservation protections in their respective communities.” 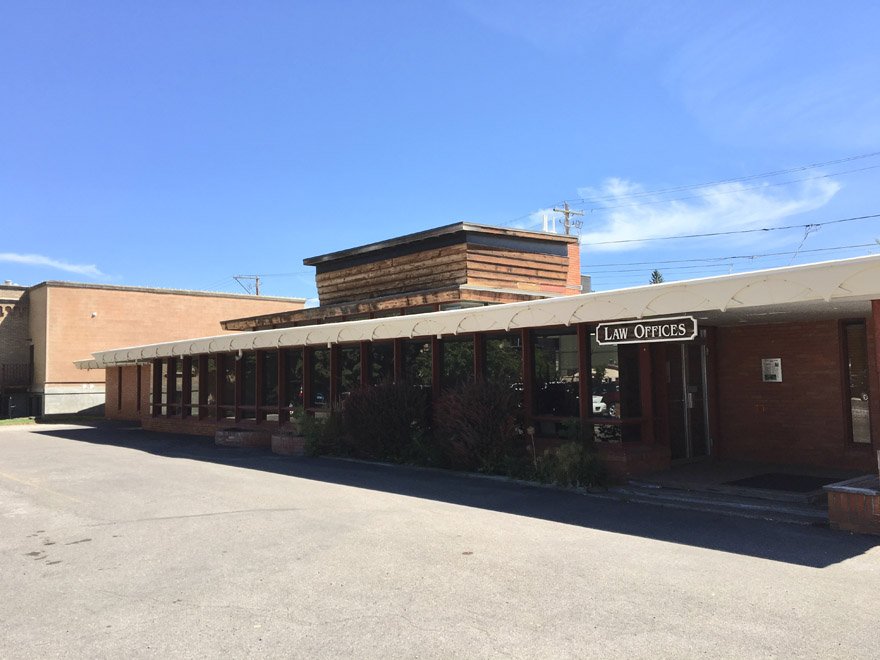 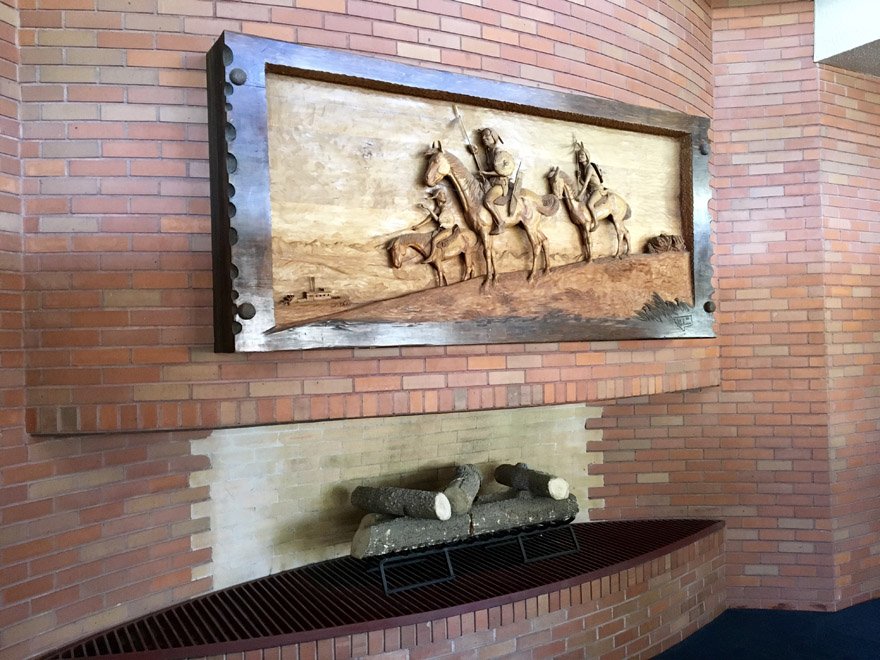 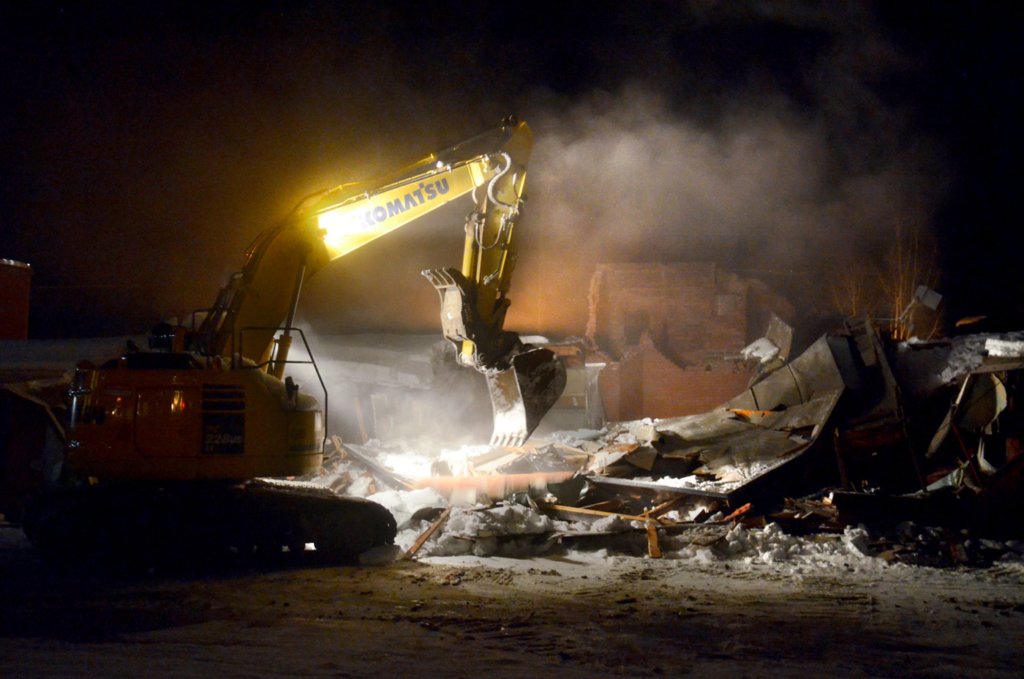 Demolition of the Lockridge Medical Clinic building began less than two hours after final terms of an offer to purchase were rejected on Jan. 10, 2018.
Photo by Matt Baldwin/Daily Inter Lake