Ravine Bluffs in Glencoe, Illinois, is Frank Lloyd Wright’s first built subdivision. Although the intent was to erect a Wright-designed house on each of the 25 lots in this small suburb north of Chicago, only five were actually constructed, in 1915. In the more than 100 years since, Wright scholars have largely dismissed the work in oft repeated narratives that these houses were small, low-cost rental units that were part of Wright’s continuing effort to develop houses of moderate means. New research, however, disputes the conventional view of Ravine Bluffs and demonstrates that it was never meant to be an exercise in “affordable housing.”

The Ravine Bluffs subdivision plat was approved by the Village of Glencoe on August 4, 1914, just two weeks before the murders at Taliesin. Booth and Wright had been working together for several years on park and city planning for Glencoe and on designs for a grand personal estate for the Booth family in that community. When the estate home proved too costly to build, they collaborated on converting the property into Ravine Bluffs. Contrary to many published views on the size and affordability of these homes, this subdivision was designed to be an exclusive, upper middle class community.

Marketing efforts for Ravine Bluffs began in July of 1915, offering the sale of lots on the east side of Glencoe, an area of town on the shores of Lake Michigan featuring wooded ravines, large estates and “the richest golf club in the world.” The location alone would have been an unusual site for affordable housing, a conclusion confirmed by subsequent advertisements in the Sunday Chicago Tribune that touted the construction of homes designed by Wright in this “new high class” subdivision. The details emphasized features that were not suited for the common man. The subdivision had “unique artistic entrance features” and a “specially designed artistic electric railway station,” even though there were two public train depots within blocks of the property. Marketing maps highlighted the adjacent golf course, a sporting amenity that most middle-class families had neither the time nor the funds to enjoy.

Advertisements for Ravine Bluffs stressed the specifics of the houses themselves describing “finish[es] and color schemes [that] will appeal to all who appreciate beautiful effects.” Potential purchasers were romanced with the offer that Booth and Wright would “prepare plans and build to suit individual tastes of purchasers who thus get … their most cherished ideas embodied in a house more artistic and better built than by any other plan.” Early ads placed Wright’s name in all capital letters to highlight his involvement. They also underscored the plan to have well-known landscape architect Jens Jensen design each lot for “artistic effect.” All of these details are meant to place Ravine Bluffs in a category above the average subdivision.

Moreover, it is clear that Sherman Booth, the owner of the Ravine Bluffs property, was not interested in championing an affordable housing community. Although he was forced to abandon plans to build the grand estate that Wright originally designed for his family, Booth still intended to build a home and live in Ravine Bluffs. He clearly did not consider himself a member of the middle class. He was a successful attorney, politician and community leader. His wife, Elizabeth, had been prominently featured in the national news as a leading suffragette, one of four women primarily responsible for the passage of legislation giving Illinois women the right to vote in 1913. Together, they were a power couple, and power couples do not normally design, promote or reside in affordable housing communities.

An analysis of the cost of the Ravine Bluffs homes in comparison with the national average and other Glencoe homes further supports the notion that Ravine Bluffs was designed to be more expensive and exclusive.

The cost of the average home in 1915 was $3,500. According to the building permits for the four spec houses issued on October 28, 1915, the projected cost of each of the initial Ravine Bluffs homes was $7,500—more than double the national average. A review of the 69 building permits issued by the Village of Glencoe that same year reveals that new housing ranged from small, one-story $2,500 homes to large two-story $10,000 houses. At $7,500 each, the Ravine Bluffs homes fall squarely into the upper end of the permits. A comparison with nearby homes discloses the same result. A house one block east was built for $4,000, and a Robert Seyfarth design two blocks east had a price tag of $4,500. All of this construction was well out of the economic reach of the average man or family in 1915.

An examination of the size and features of the Ravine Bluffs homes similarly discounts traditional theories that these homes were built as small, low-cost rentals. The average house constructed in 1915 totaled 1,500 square feet. Each of the Ravine Bluffs homes exceeded the average, measuring approximately 1,800 square feet. Three other larger homes were sited and planned but never constructed, arguably because of the additional cost. The four initial spec homes use a nearly identical plan derived from Wright’s $5,000 Fireproof House with variations in siting, roof type, porch placement and detail to provide individual character. Every room contains windows on at least two sides. Each has a unique fireplace design, different wood species for interior trim and a distinct light screen window pattern.

The Ravine Bluffs homes varied from Wright’s more affordable model because they did not adhere to a strict planning grid. They also did not utilize precut materials and they were not intended to be built entirely in concrete. The homes did, however, include some economical features including standardization of window sizes, nearly identical interior and exterior trim details and the use of “E-Cod Fabric” to speed installation of the exterior stucco. Foundations were constructed with hollow structural clay tiles, rather than more expensive concrete.

All of the Ravine Bluffs homes were constructed by H. A. Peters and Company, a large-scale builder selected for the entire subdivision including roads, utilities, a bridge and the housing. As a result, Peters was most likely able to apply mass production techniques such as purchasing materials in bulk and scheduling work across multiple building sites simultaneously to speed construction time and raise quality without increasing cost.

In the end, as Wright’s first built neighborhood, Ravine Bluffs featured well-designed modern homes that were marketed to upper-middle-class buyers seeking quality, uniqueness, comfort and exclusivity. The data confirms that they were never meant to be, nor have they ever been, “affordable housing.” The extent to which Wright scholars may have relegated these homes into an affordable category cannot be justified by either the cost, the size, the design or the overall subdivision plans. It appears only to correlate to the amount of time the homes remained unsold—a circumstance that corresponds more appropriately to the economic, social and cultural impact of World War I.

Sherman Booth was essentially a man in the wrong place at the wrong time. Although one of the Ravine Bluffs homes sold immediately, society’s taste in architecture in 1916 began moving away from the prairie style and the war in Europe cast a shadow on consumer confidence. A frightened nation was not interested in buying exclusive new homes. When the United States joined WWI in April of 1917, four Ravine Bluffs residences were still unsold. Family members bailed Booth out by purchasing three. The remaining spec house was rented until it finally sold on September 1, 1921, almost six years after Wright and Booth began to build a “new high class” neighborhood on the gold coast of Glencoe, Illinois, “the most desirable residence town on the North Shore.” 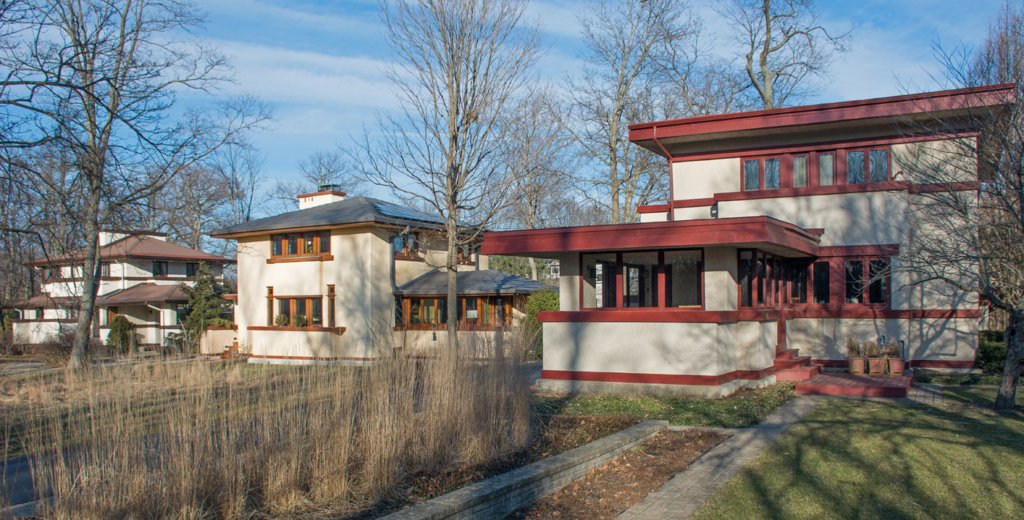 Wright on the Market: Booth House in Ravine Bluffs

Wright on the Market: Kier House in Ravine Bluffs