“Bring out the nature of the materials. Let their nature intimately into your scheme. The good building is not one that hurts the landscape, but one which makes the landscape more beautiful than it was before the building was built.”
~Frank Lloyd Wright

In the first couple of years after we bought Frank Lloyd Wright’s Brandes House, in Sammamish, Washington, I noticed an unusual pleasure. In late January, the week of my daughter’s birthday, the large tree that stands outside our living room casement windows would bloom. That yellow-orange witch hazel marked the start of the blooming cycle of our winter garden, much of it planted and conceived by Mimi Brandes with the help and consultation of Frank Lloyd Wright.

Following that remarkable blossoming, which always led me to think of our own family’s winter bloom of life, and just to the tree’s left, the pink star magnolia would startle to life, a harbinger of spring. Soon, an inflorescence would follow on the next tree to the left, the gorgeous but tiny florets on our towering crimson maple, and then finally, in late summer, as a spectacular finale, as a completion to this gorgeous counterclockwise sweep around the living and sleeping quarters of the home, the delicate, elongated china white flowers on a multi-tiered dogwood would unfold.

A tree floricycle? I don’t know. Leave it to the experts to decide. I can only tell you that Mimi Brandes, the wife of the original owner and builder of Brandes House, was a landscaping contributor at Sunset Magazine and a master gardener. We know (from documents found at the Avery Library at Columbia University) that she worked with Wright on the design for the gardens and today we enjoy the now-mature results of her work.

But that is not why I am bringing up this fascinating tiny fact about our wonderful and difficult grounds. It is because of the start date — late January. While the trees still bloom in order, the date is no longer the same. That late January beginning for the witch hazel has crept earlier and earlier. This year, the first blooms appeared in early December, close to two months ahead of schedule. The winter bloom, which reminded me so much of the flower that is my daughter, was losing its tether to the seasons. Or perhaps it was trying to tell me something.

The “Heat Dome” in the Seattle area (which includes Sammamish) last July came as a surprise. But perhaps I should have expected it. Perhaps our trees were sending a warning. All of a sudden, it seemed, the state known for rain was facing days of parching, unprecedented heat. Why, I wonder, were we surprised? 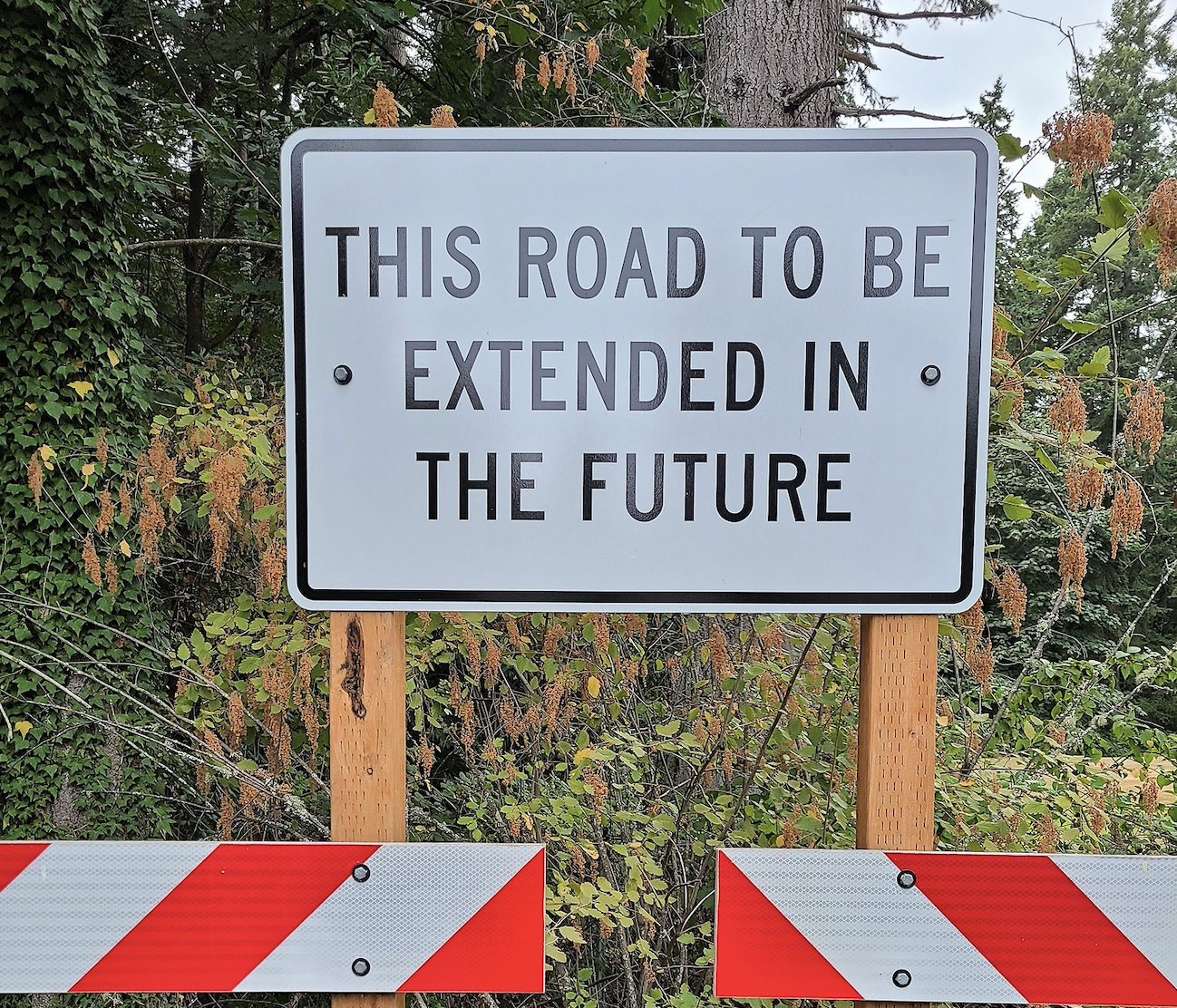 You can see the Brandes House grove of Douglas Fir trees directly over this road sign. Beyond the grove is Frank Lloyd Wright’s Brandes House, designed by the first organic and green architect.

Since we bought our home in a Seattle suburb, it has become a neighborhood of invasion. As I write this, we are being buzzed again by military helicopters from Joint Base Lewis-McChord, who seem to use our 3.2-acre hilltop aerie for practice. Our speculation is that it is a part of training exercise for a mountain elevation with trees, since our property contains one of the few remaining stands of tall trees on the Sammamish Plateau. So far, there have been no incidents–the helicopters have not become entangled, and it has not become necessary to rescue any pilots dangling from parachutes from the 20-story Douglas firs. There used to be tall trees everywhere here. This is Seattle after all. Land of Trees. Land of soft weather. Now there are fewer and fewer stands.

Our trees are besieged from below as well. Laminated root rot, a fungal illness that kills Douglas firs, is spreading in the area. Some of the Douglas firs in Pine Lake Park, less than a mile from our house, have gotten the rot (formal name Phellinus weirii) and have had to be destroyed. We have consulted with tree experts, but there is not much we can do. After all, arborists only recently learned that trees have been speaking to each other all along, through their roots and helpful fungi.

I could go on, discuss our new annual season, “smoke season” from the wildfires in adjacent Oregon and British Colombia, but you get the point.

Fun piece of trivia – What Frank Lloyd Wright House has had three addresses but never moved? That would be our Frank Lloyd Wright house! (Bellevue, Issaquah and now Sammamish.) The rapid development of the area has created a burgeoning population and a free-for-all destruction by developers of the natural environment. Right around the corner, we watched them pull down stands of old trees, and then flatten and reshape the natural land and habitat. It is a very non-Wright approach to design. Where there were once tall trees, there is now a dense and featureless community of plasticky homes. At the end of that new street, pointing directly toward our grove of Douglas firs, some over 300 years old, is a sign. “THIS ROAD TO BE EXTENDED IN THE FUTURE”.

There are several other places adjacent or almost adjacent to us where developers tried to put up these small 8-20 building developments–even on our own land (which would be more valuable without our home than with it), and the immediately adjacent lot, a parcel with covenants placed on it by Ray Brandes. But in some cases we have succeeded, with the help of our neighbors, the Frank Lloyd Wright Building Conservancy, and a friendly city councilman who cared about a heritage tree, in stopping a tiny bit of the wholesale destruction of the area, at least for now. 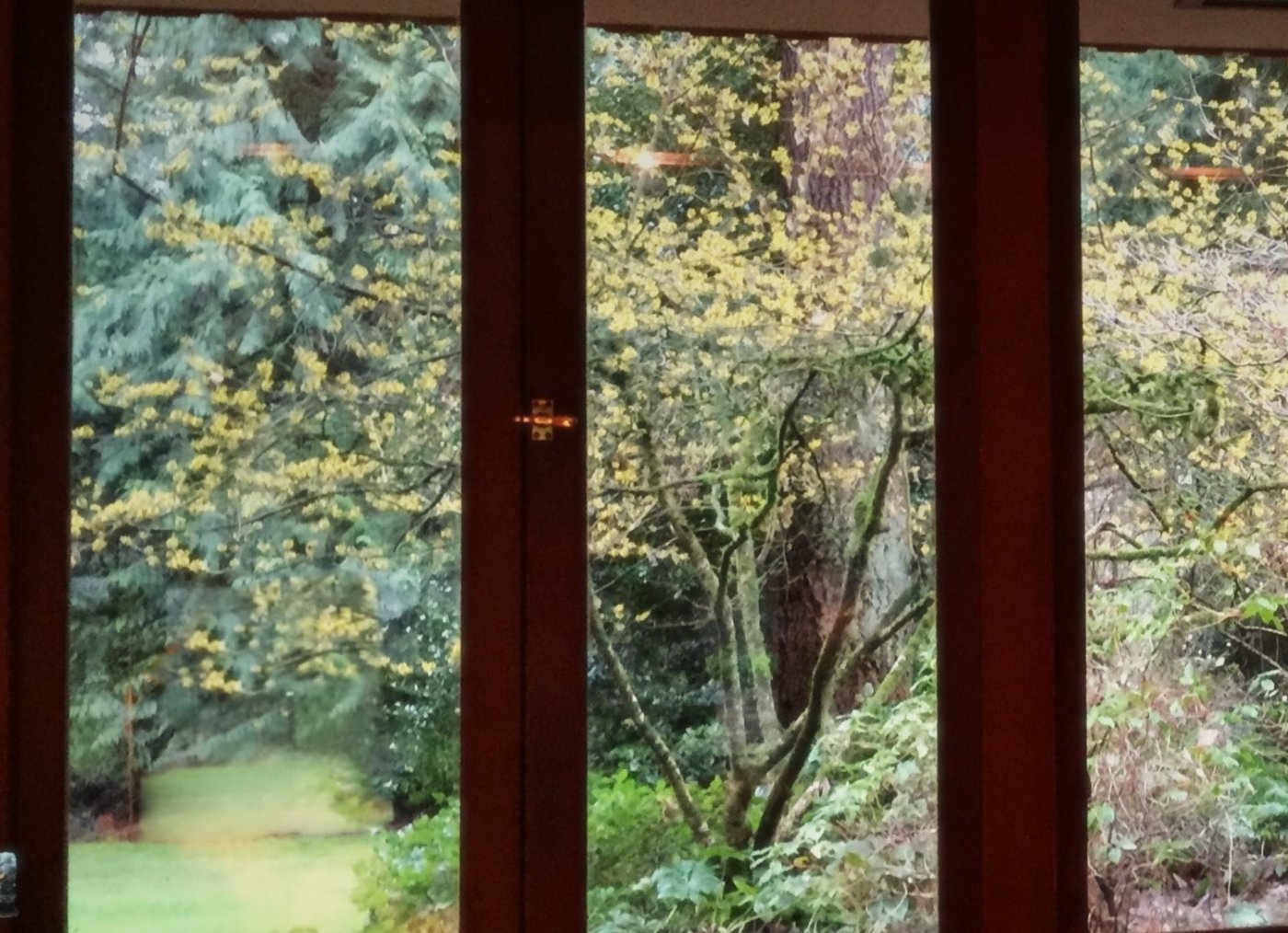 This mature Witch Hazel, a beautiful former winter bloomer, has become untethered from its season.

Through the rumor mill we have heard that certain developers refer to us, in a derogatory way, as “those Frank Lloyd Wright People.” This does not stop them or others from continuing to hope that we will sell our land, so that they can demolish the Brandes House and build up to 18 plastic houses in its place. We get letters, enquiries, entreaties, sometimes daily. We toss them in the trash. We can only do this one little thing, but it is something.

The devastation started before we got here, although we were unaware of it. Huge construction trucks passed our house daily, on a road which had been gravel when Ray Brandes (a home builder) built the house in 1952. The house he built with his own hands as a home and office for himself and his wife Mimi was the second ever on the Sammamish Plateau.

This summer, as the temperature reached an unbelievable 112 degrees Fahrenheit on our land, I was impressed with the performance of our un-air-conditioned home. Frank Lloyd Wright’s organic principles shielded us and made us relatively comfortable in an unprecedented and, at the time he was alive, unimaginable environment.

While Frank Lloyd Wright was the first organic and green architect, he gets little credit for it. The materials, their application and their deep connection to the natural environment provided eco-sensitive design before those words were even in use!
That is some comfort in a world where road signs point to a challenging future.

The Good That We Do…

Besides the architectural tragedy – consider the environmental loss! –When an historic structure is demolished, it is not only the history that is lost. The energy cost of demolition, pollutants, landfill waste and carbon emissions add up as well. In the year 2018 the EPA estimated that 600 million tons of construction and demolition debris were created in the United States.

Remember that environmental costs don’t end once the building has been razed. The EPA has classified new construction as one of the top emitting sectors for greenhouse gases, mostly because of the high energy required to make cement.

Every new building releases a carbon load into the atmosphere that won’t be “paid back” for 10-80 years. Even the most energy-efficient projects create this kind of carbon debt. Which is why experts agree that “the greenest building is one that’s already built.” (Preservation Green Lab study, 2012)

Conclusion – You not only own an architectural treasure; you own a green structure and are helping the earth!