The Stuart Richardson House in Glen Ridge, New Jersey, will soon have new stewards. Designed in 1941 for an actuary and his wife, the home was the result of consultations with Wright when he was in New York City designing the Guggenheim Museum. The Richardsons constructed the house in 1951 with input from the architect.

Margot Richardson Aronson recalls that her father, Stuart, dreamed of becoming an architect and when that wasn’t financially feasible, he retained his interest in architecture. As newlyweds, he and his wife traveled to Taliesin to meet Wright. The couple commissioned a plan for one of Wright’s Usonian houses, but the advent of World War II kept them from constructing the house until the 1950s.

Aronson recalls her parents working with Wright to modify the plans to make the home fit their family of four and recalls the friendly connection they had with the famous architect. “I was about 10 years old when the whole family had breakfast with Wright in his suite at the Plaza Hotel,” she says.

The home’s floor plan is based on a hexagonal module, with triangular recessed lights that Wright also used in the Guggenheim. The triangular living room includes clerestory windows and an inverted pyramid ceiling made of cypress. With 14 French doors that open to a patio, brick-walled terrace and the backyard, the room combines indoors and outdoors seamlessly.

The current owners say that the indoor-outdoor connection is one of the things that drew them to the house. They note, “As longtime city dwellers, creature-spotting through the big windows was a treat,” adding that the home’s wooded half-acre property also has a soothing effect when coming from the city. “Whether it be the pool and garden, the library, or the pond, the home has the ability to transfer you into a peaceful and serene state.” Invisible from the street, the home’s outdoor spaces include a stream, heated in-ground pool and flower gardens.

On the interior, the centerpiece of the living room is Wright’s triangular wood-burning fireplace. A built-in dining table and chairs, designed by Wright, separates the living room from the galley kitchen. Wright’s play with geometrical shapes continues throughout the home. The heated, red concrete floors are etched with hexagons throughout the home. The rooms are also formed entirely of 60-and 120-degree angles, with no right angles.

In reflection of Richardson’s love of music, Wright designed a motif reminiscent of a musical notation that is a repeating pattern carved into the perforated boards running along the top of the living room and master bedroom. An alcove off the living room features built-in cabinets perfectly scaled for record storage. 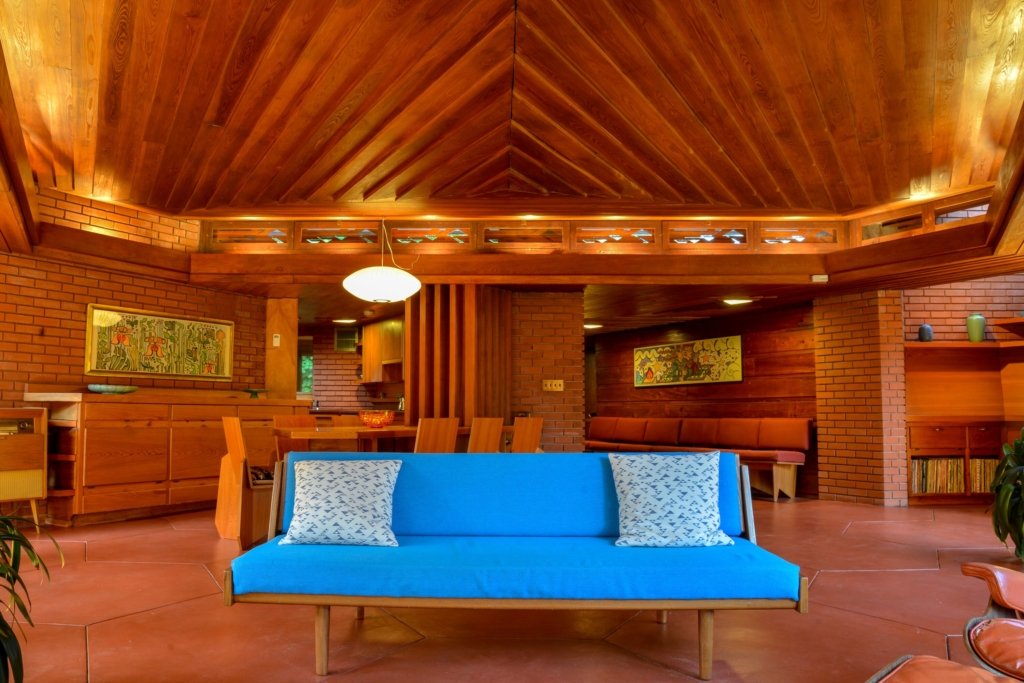 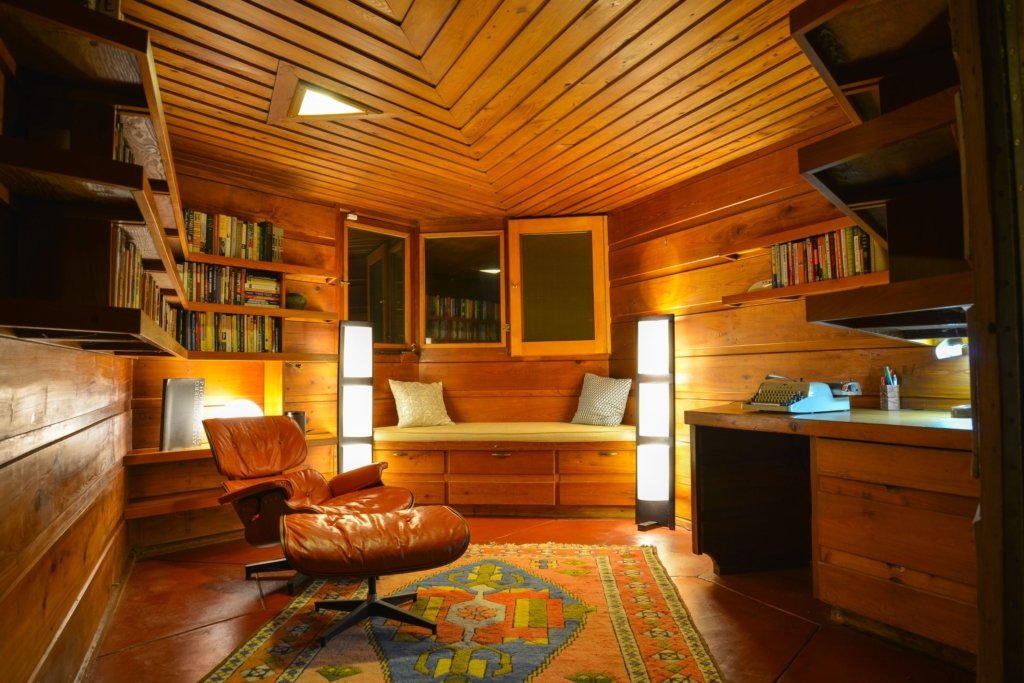 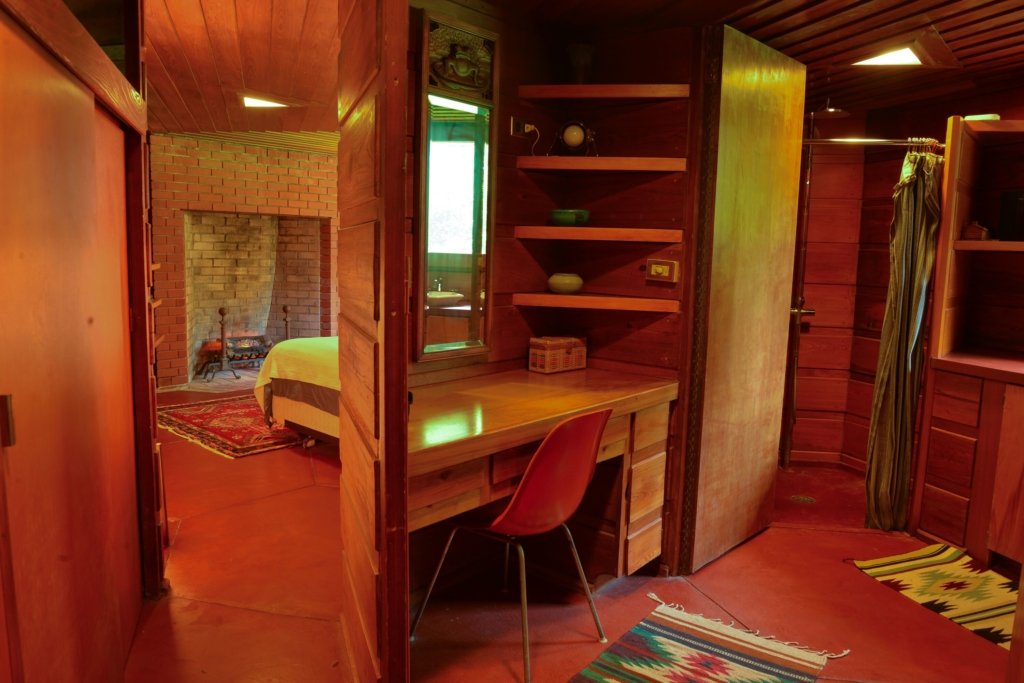 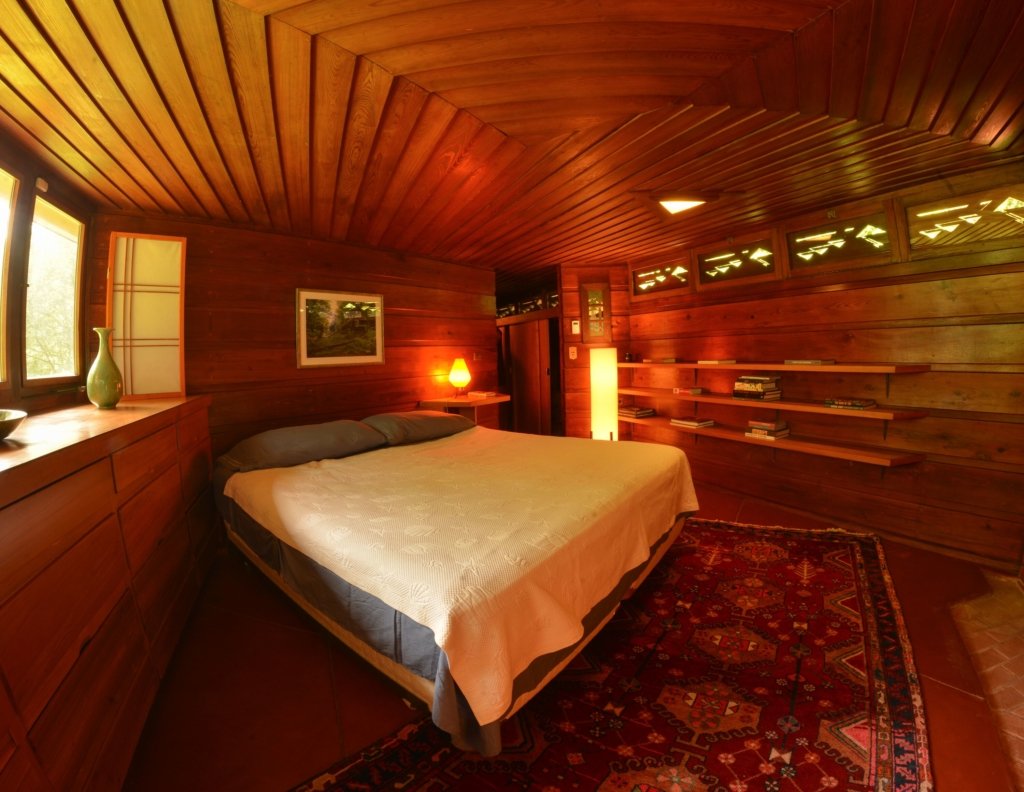 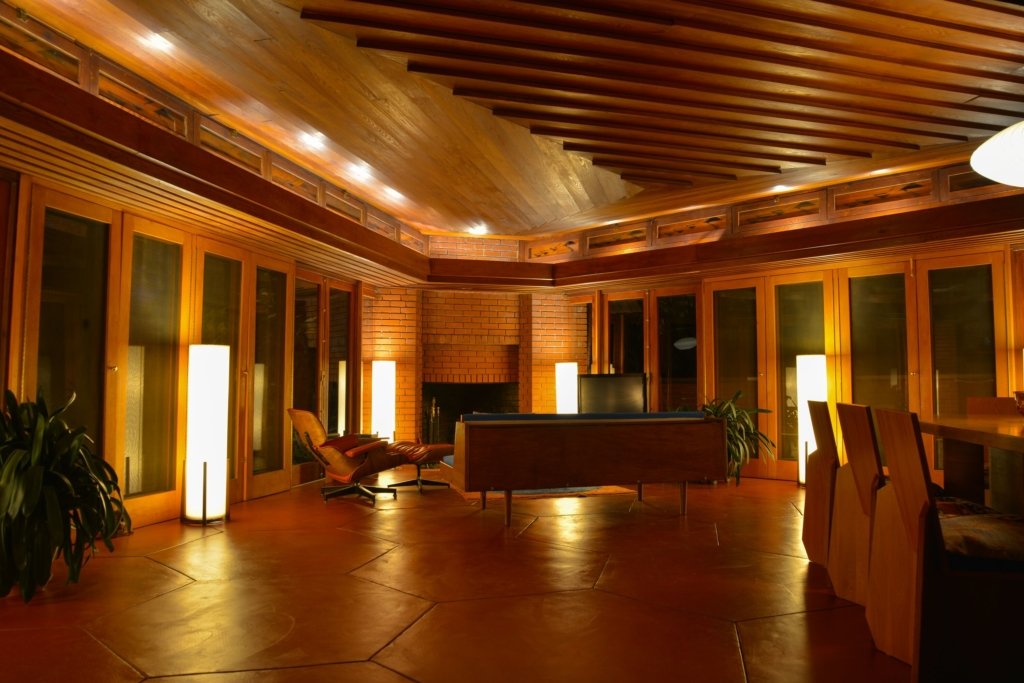 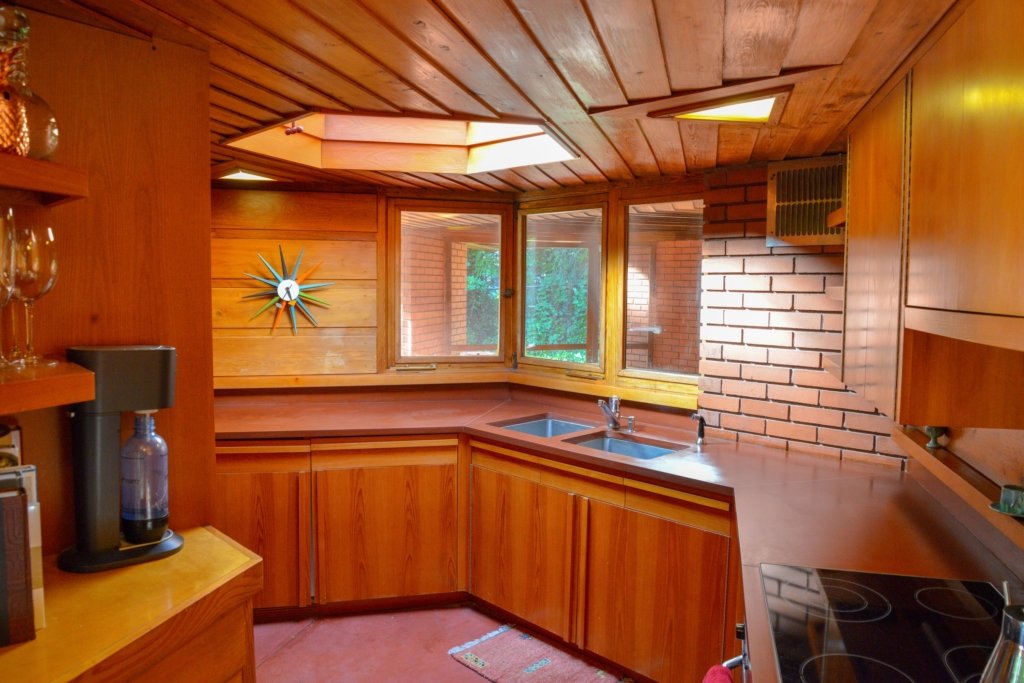 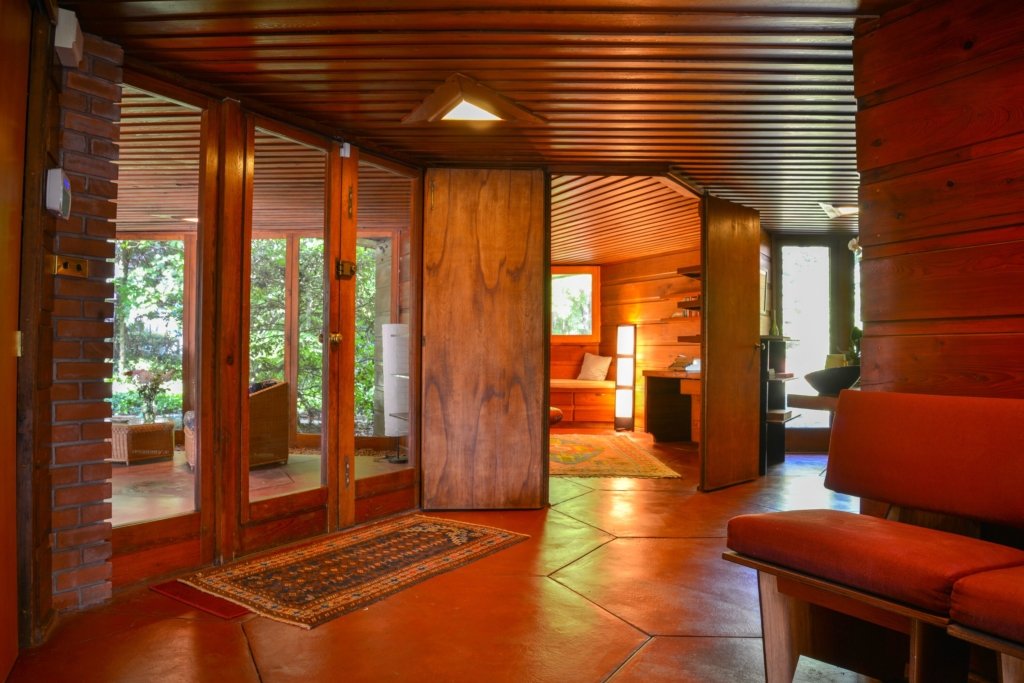 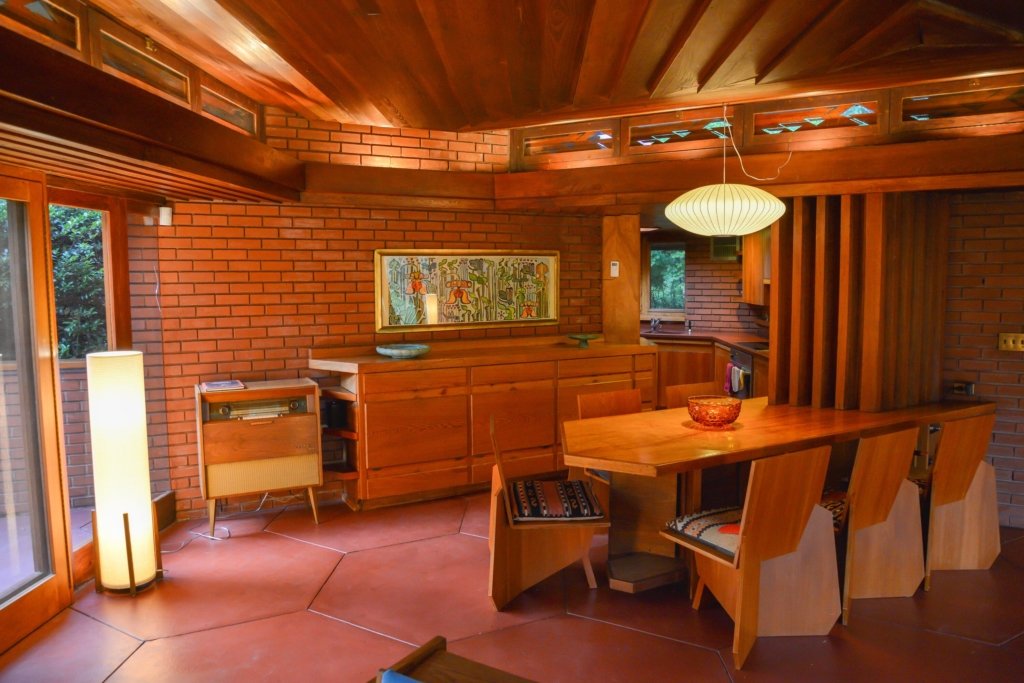 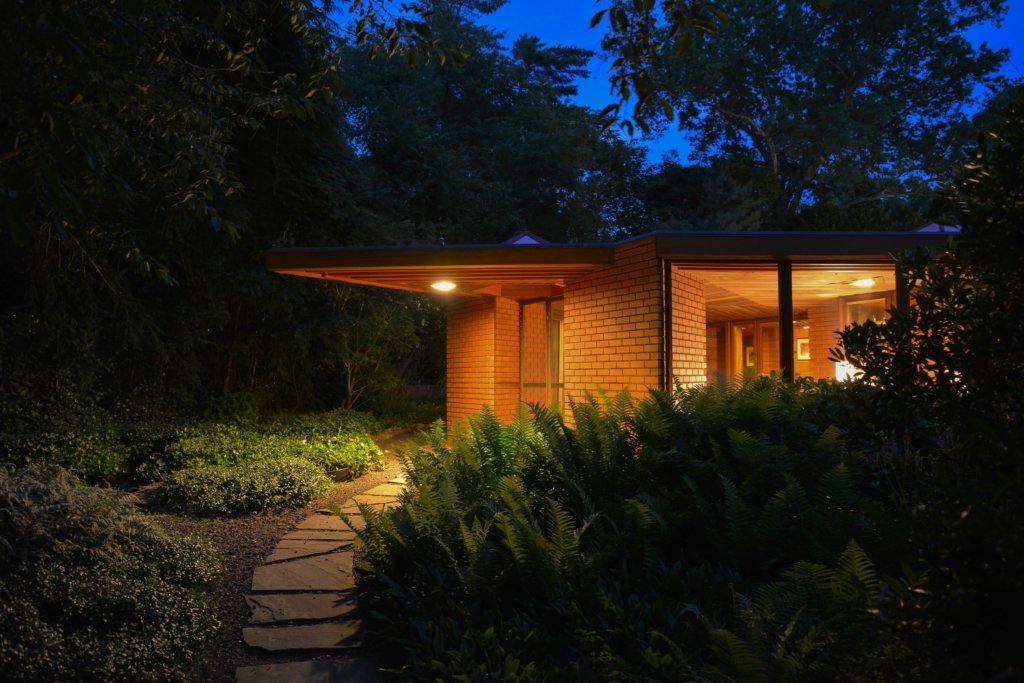 "Beyond being a work of art, we loved how private the home was."

Aronson’s family sold the house after living there 20 years, and the Frank Lloyd Wright Building Conservancy connected her to later owners when she attended a conference in Seattle and met John Payne. She says of Payne and his wife, retired judge and current Conservancy Board President Edith Payne, “We developed a lovely friendship. They were such extraordinary stewards of the house.”

Edith Payne recalls that when she and her husband John purchased the house in 1996, the radiant heating system had been replaced by unsightly glass heating panels affixed to the cypress walls of the house. Over the years, guided by the Conservancy and working with architect Lawrence Tarantino, his wife Sharon, and a number of skilled craftspeople, they renovated the kitchen to be more in keeping with the house, replaced the roof and soffits, refurbished skylights, restored the living room French doors and augmented the landscaping.

“I’m sure all Wright homeowners have found their homes unique,” says Edith Payne. “We were no exception, deriving particular pleasure from a living room ceiling clad in cypress that comes together in a point like an upside-down pyramid and from the oddly shaped rooms, dictated by the hexagonal geometry of the controlling floor design.”

Payne, who sold the house in the years following her husband’s death, notes that it is heartening that the house is located in a rigorously enforced historic district, protecting it from developers, and says she and her husband realized the owning such a home requires a different mindset that can be quite rewarding. “For us, the projects upon which we embarked constituted labors of love that only enhanced our appreciation for the underlying bones of the structure. However, such efforts require a certain preservation mindset that not all homeowners have or are willing to acquire. Nonetheless, it is our hope that any new owners of ‘our’ house will find its preservation as significant a goal as we did.”

The current owners weren’t originally looking to purchase a Wright home as an escape from the city, but say the minute they saw the three-bedroom, two-bathroom midcentury stunner, they knew it was the house for them. Living in a Wright masterpiece had unexpected benefits. “Beyond being a work of art, we loved how private the home was as well as the opportunities to share the space with our friends and family. Entertaining in the home has been one of our favorite joys of owning the property.”

While the current owners are moving on to a new chapter in their lives, they say that owning a Wright home created a unique bond that was invaluable. “Taking care of such a distinctive and unique property gives you a very personal connection to it. Basic maintenance tasks feel less like housework and more like grooming a beloved family pet.”

To this day Aronson credits living in a Wright house with opening up a world of possibilities for her and her sister. “There was love and nature and change built into that unconventional house, and it’s all still there: in the walls, in the bricks, in the angles, in the relationship outside to inside. I remember how we loved having slumber parties in the living room, looking up at that fabulous ceiling, and the floors were warm! So many memories there.”