The Origins of the Frank Lloyd Wright Building Conservancy

The Darwin D. Martin House (1903-05) in Buffalo, New York, vacated by Isabelle Martin in 1937, suffered a long period of neglect, alteration and partial demolition until 1976, when the threat of turning the principal Martin residence—then a property of the University at Buffalo (SUNY)—over to the State Office of Mental Health for use as a halfway house precipitated the community’s heightened awareness of the potential value of the house.

Having joined the art history faculty of the University at Buffalo in 1975, I had begun to use the Martin House as a teaching tool for students in a course dedicated to Wright’s work. From 1977 to 1981 I served as co-chair of The Friends of the Darwin D. Martin House with Lorelei Z. Ketter, the wife of the university president, Robert Ketter. We organized a tour of Wright’s Buffalo buildings, raised modest funds for the repair of the collapsed front porch, and lobbied our congressmen, Jack Kemp and Henry Nowak, on behalf of the house. Ineffectual as fund-raisers, we used to speculate that it could take as much as $5 million to restore the house. To date, the current restoration has cost nearly $50 million.

When Steven Sample became president of the University at Buffalo in 1981, he shifted the responsibility for the Martin House to the dean of the School of Architecture and Environmental Design, who appointed John O’Hern resident curator of the house in 1983, a position that he held until 1989. O’Hern wrote a Master’s degree thesis on the Martin House, involved architecture students in numerous research and restoration projects, and raised funds for specific restoration activities, but the house continued to present ever-increasing problems of maintenance, surveillance and programming.

Through discussions born of O’Hern’s and my own concerns over the fate of the house, it became apparent that many of its problems—how to raise funds, how to effectively promote the house, how to organize and train docents, how to employ the house as an educational tool—were problems that other publicly accessible Wright sites, of which there were about 25 across the country at that time, also were facing and solving.

It seemed eminently reasonable to create some kind of venue for sharing information about Frank Lloyd Wright’s distinctive architecture.

Early in 1985 I proposed to O’Hern that we stage a conference to be titled Frank Lloyd Wright’s Publicly Accessible Buildings: Problems and Programs, using art history departmental funds. A brochure was printed and sent out to likely individuals and institutions involved in Wright preservation issues; the registration fee was $15 and the dates were set for October 25-27, 1985. Neil Levine gave a stirring keynote presentation entitled “Frank Lloyd Wright’s Own Houses and His Changing Concept of Architectural Representation” at the Albright-Knox Art Gallery. During the following two days there were tours of Wright’s Buffalo buildings and presentations by Ginny Kazor, curator of the Hollyhock House in Los Angeles and by Wright preservation specialists John Eifler, John Vinci and Donald Kalec. Ample time was set aside for the attendees, who came from Minneapolis, Milwaukee, Los Angeles, Chicago, Boston, Kansas City, Ithaca, Washington and Toronto to get to know each other and to discuss common problems. How successful was it? Attendance was modest with 60 participants but sufficient to stimulate conversations.

I would measure its success by what followed. Ginny Kazor immediately proposed to continue the conference the following year in Los Angeles, but under a different title, “Frank Lloyd Wright’s Buildings Preparing for the Future: A Conference for the Owners and the Administrators.” By any measure Ginny’s conference was a much greater success than the one in Buffalo. The tours included buildings by Frank Lloyd Wright, Lloyd Wright and Eric Lloyd Wright, along with others by John Lautner, Bernard Maybeck, the Greene Brothers, Richard Neutra and Rudolph Schindler. Presentations were given by Donald Hallmark on the Dana-Thomas House (1902-04) in Springfield, Illinois; Henry Whiting II on the Archie Teater Studio; Aaron A. Gallup on the National Register of Historic Places; Nicholas Olsberg on the Getty collaboration with the Archives of the Frank Lloyd Wright Foundation; and Joel Silver, Eric Wright and Martin Eli Weil on the restoration of the Storer House, followed by a reception at the Storer House, hosted by Silver. 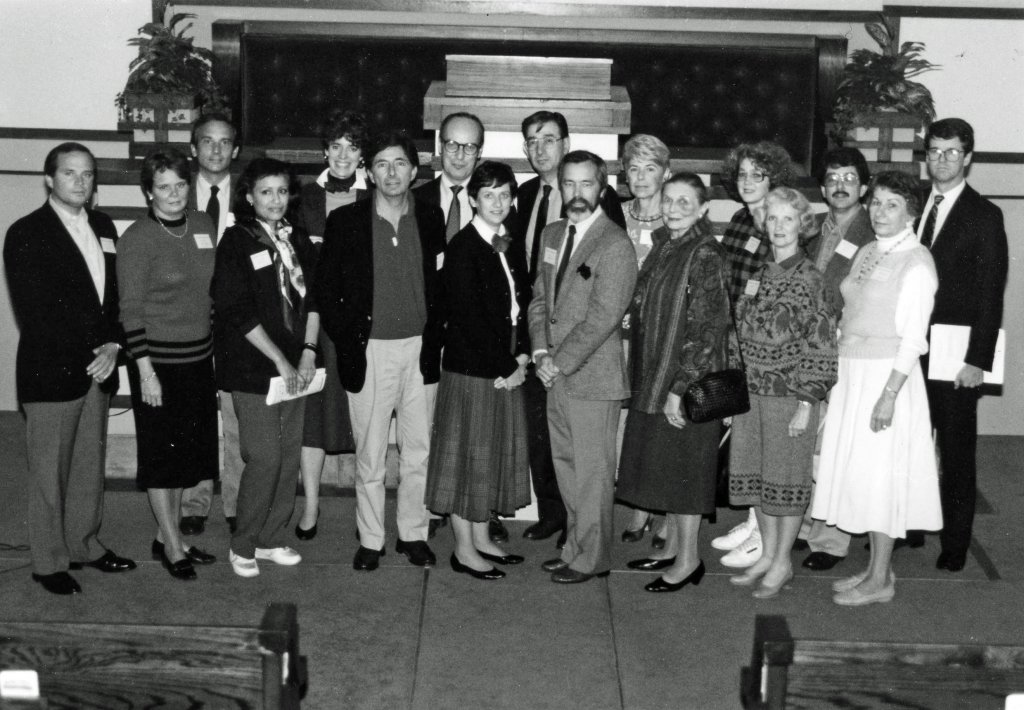 An early Conservancy board at Unity Temple in Oak Park, Illinois 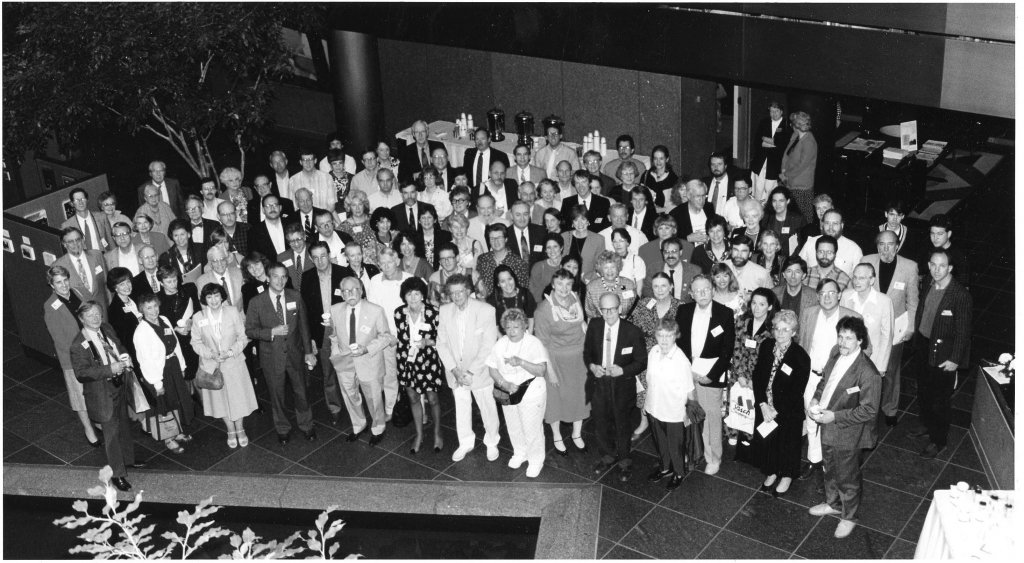 A gathering of some of the 140 participants at the Conservancy’s second annual conference in Grand Rapids, Michigan 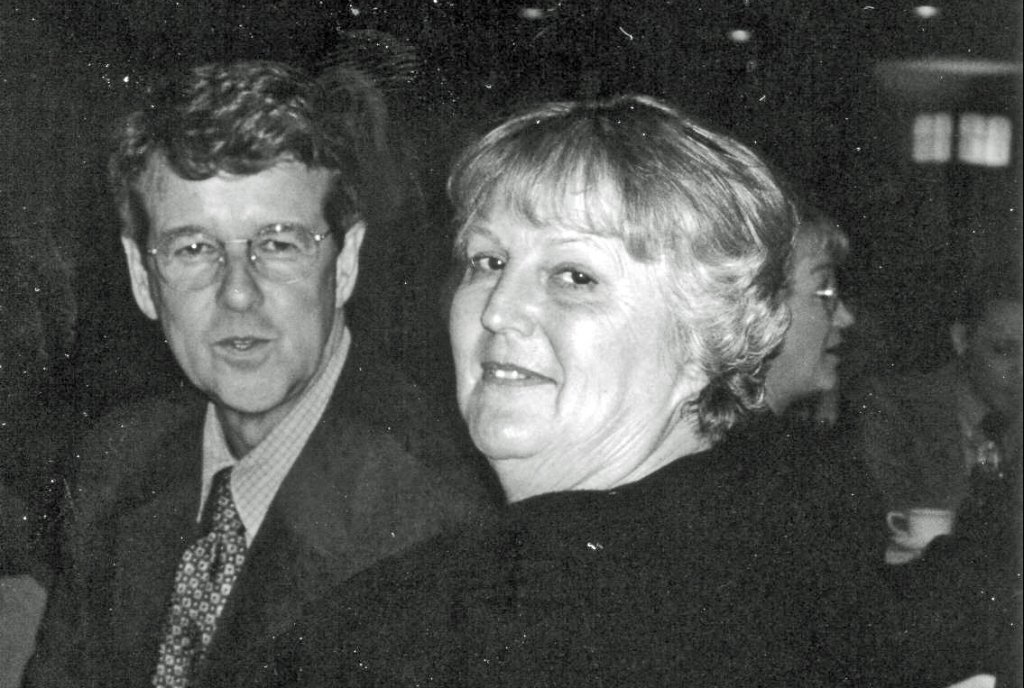 Founding board members Jack Quinan and Virginia Kazor, hosts of the first two ad hoc gatherings in Buffalo in 1985 and Los Angeles in 1986 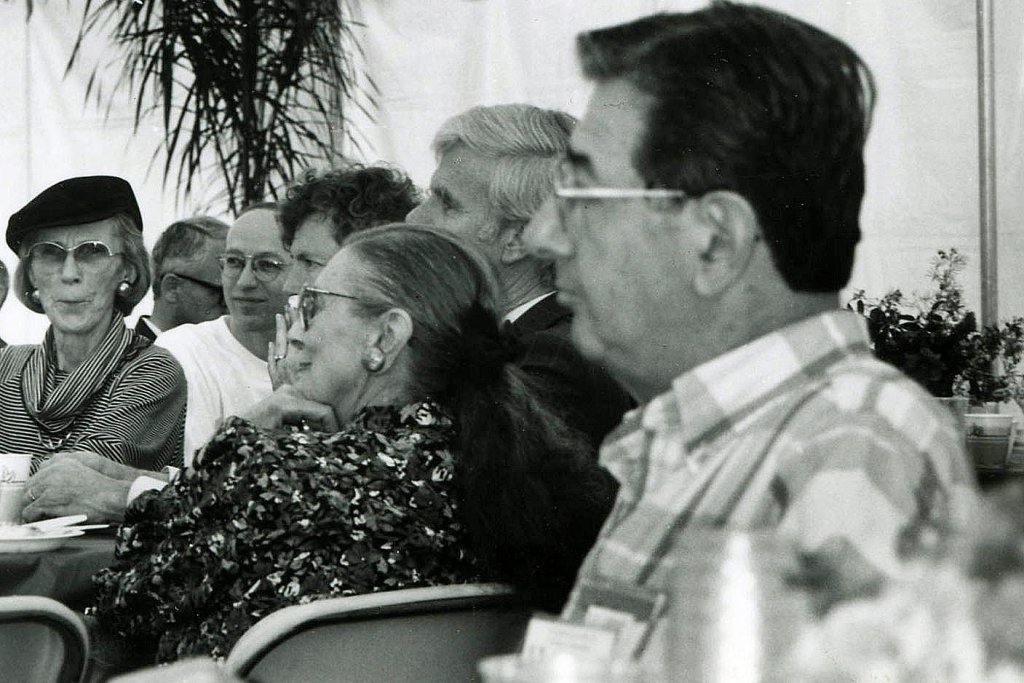 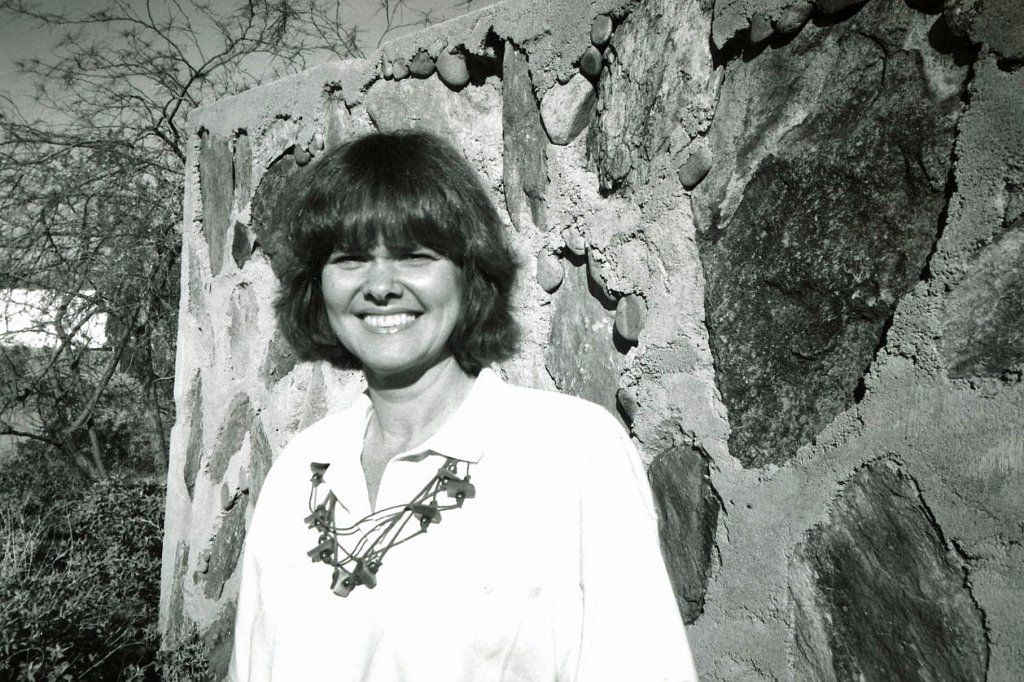 Carla Lind was hired as the first executive director at the first Conservancy conference in Scottsdale, Arizona. 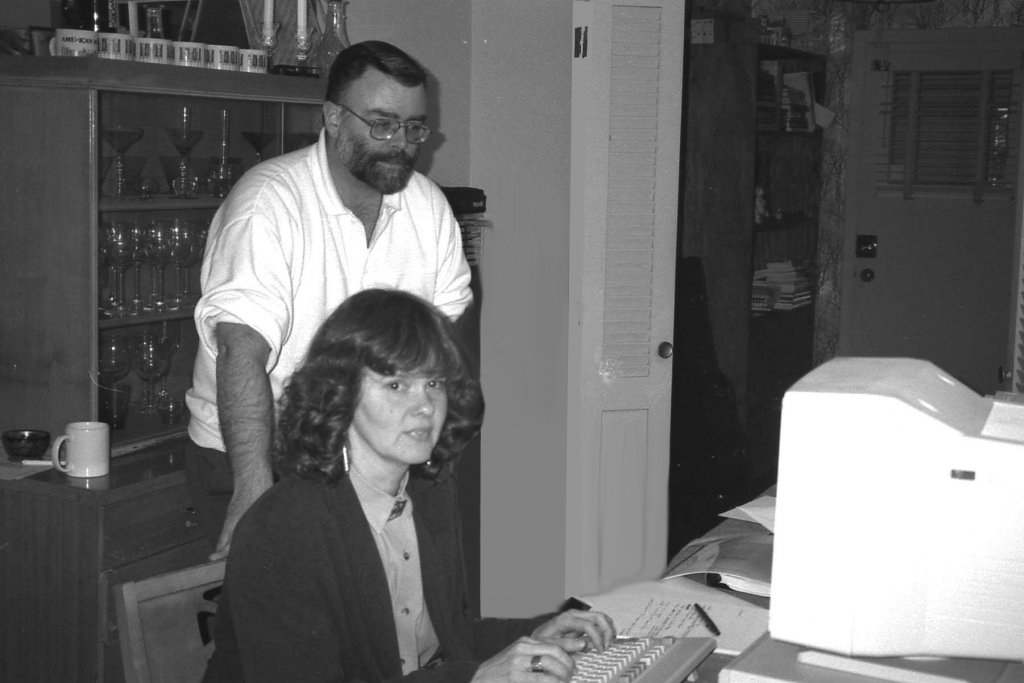 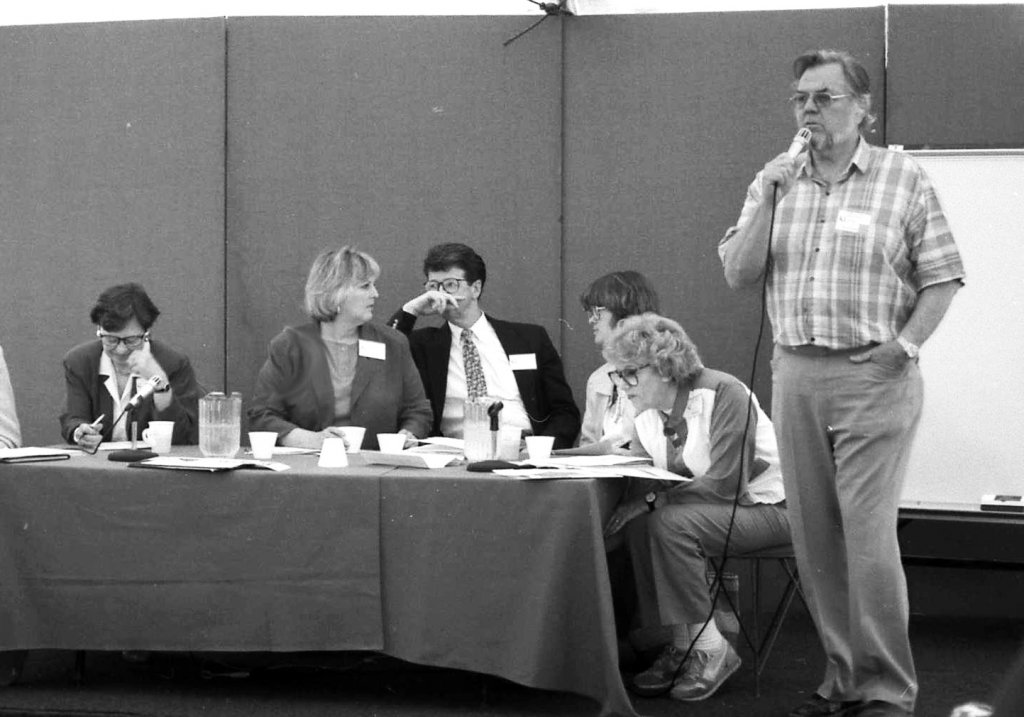 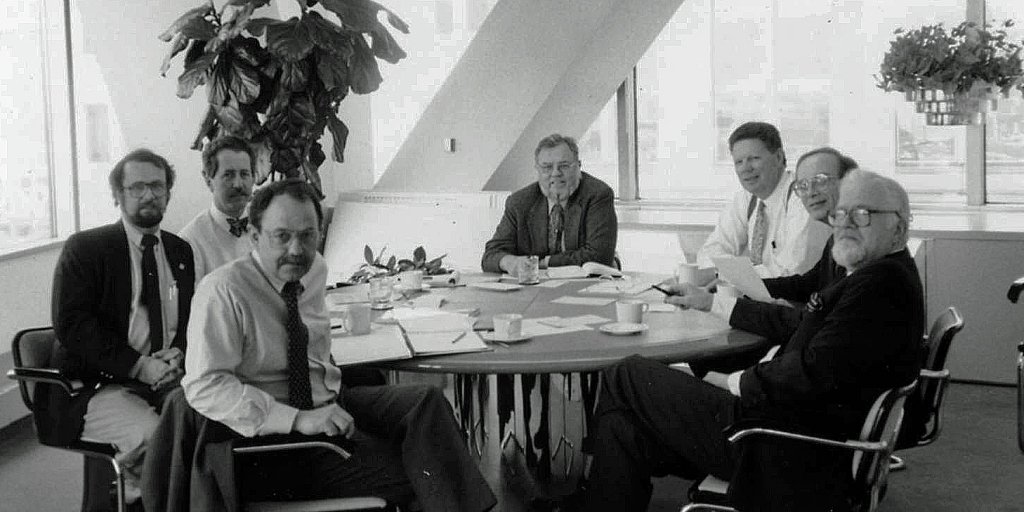 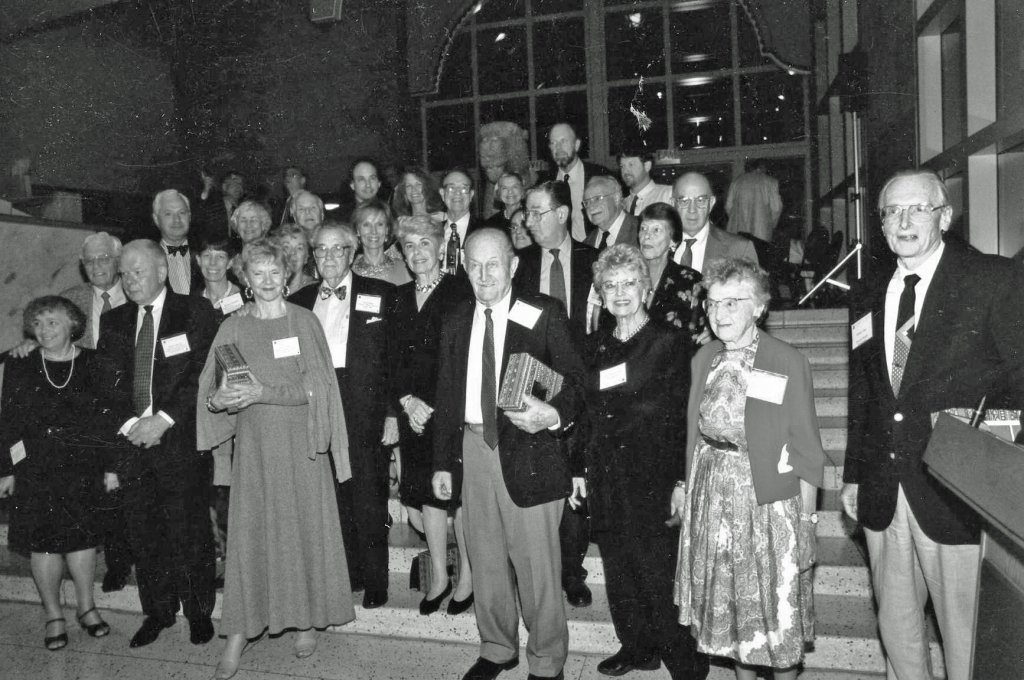 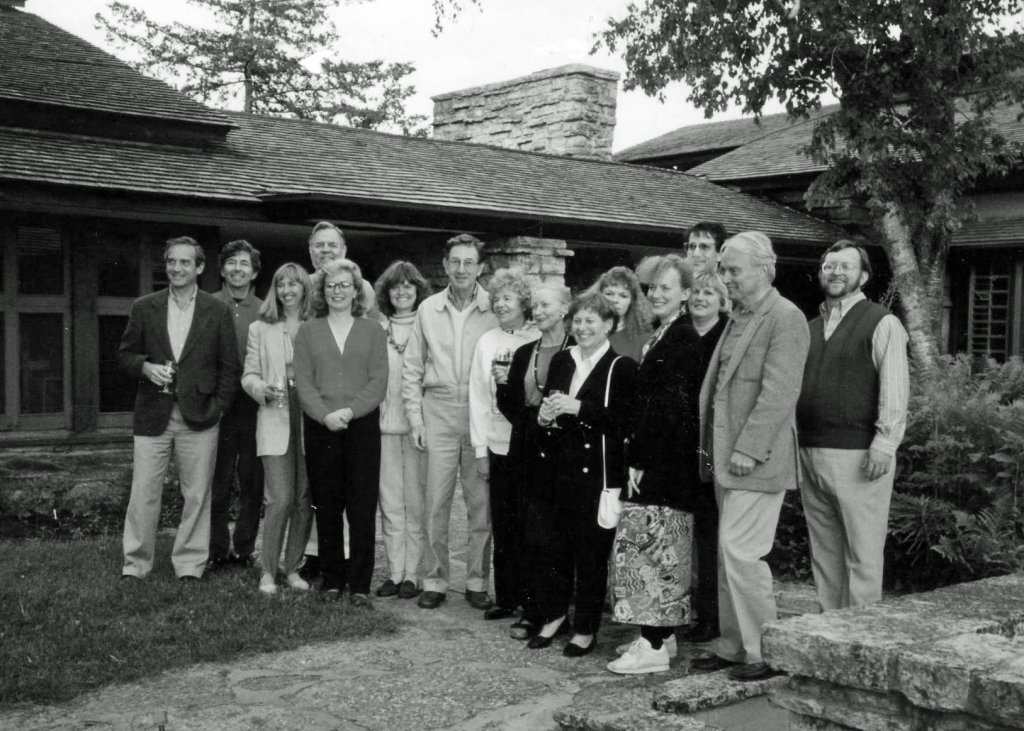 Another early board gathering at Taliesin in Spring Green, Wisconsin 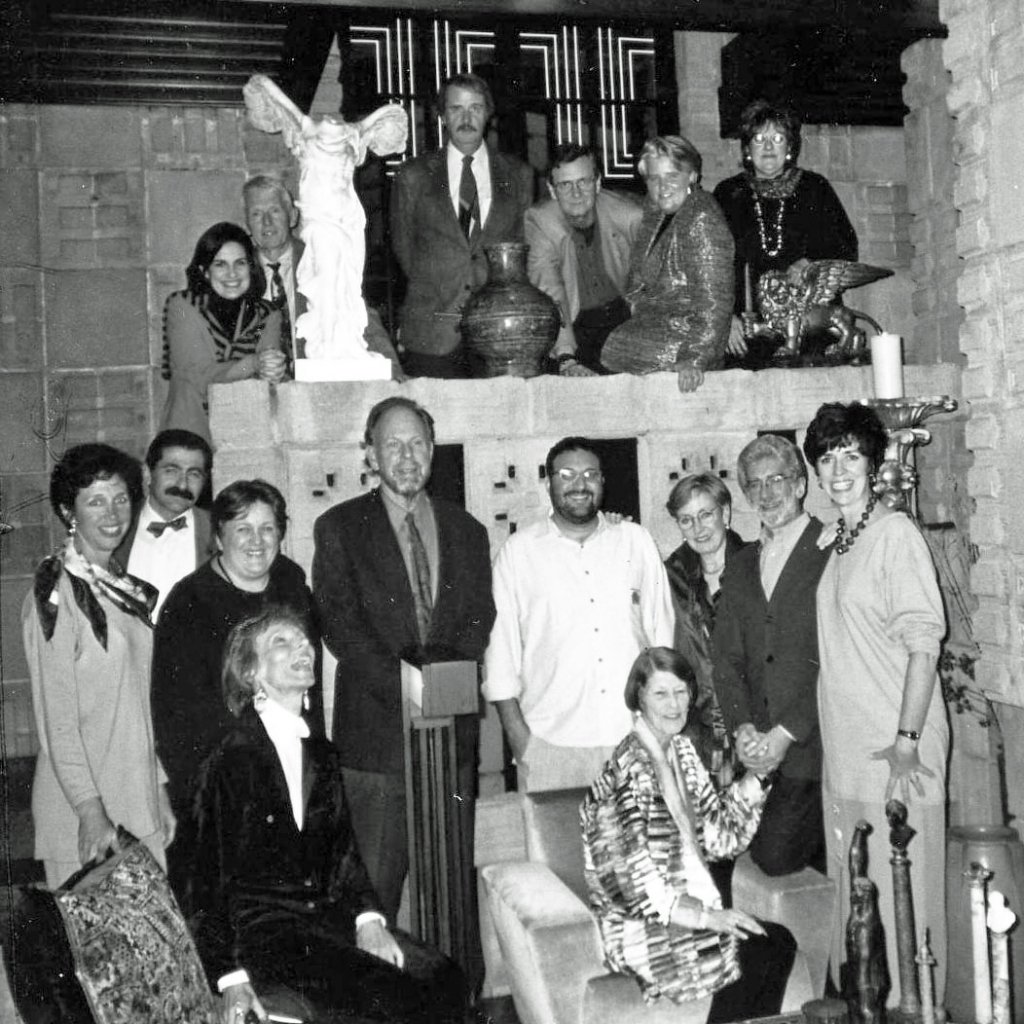 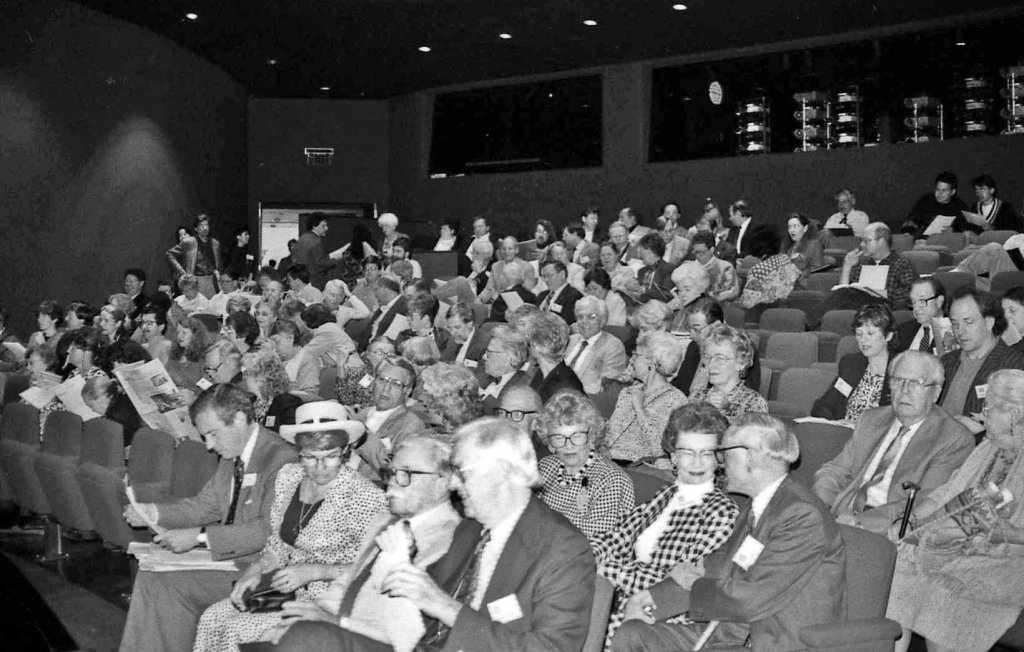 An enthusiastic audience is ready for the stimulating lectures at an early conference session.

The high point of the presentations, in my estimation, was a panel discussion moderated by John O’Hern that included Wright clients Roland and Ronny Reisley, George and Millie Ablin, Don and Virginia Lovness, and Arch Oboler. A Hollywood booking agent couldn’t have assembled a better cast. Each of the paired spouses played off one another in their individual ways with hints of George Burns and Gracie Allen not to mention Lucy and Desi. The Lovnesses nearly stole the show as Virginia, a petite woman given to designing her own Bruce Goff-like outfits, sparred verbally with her strapping husband, Don, who treated the whole affair with a bemused grin. Arch Oboler, a Hollywood screenwriter, really did steal the show with his recollection of having Wright, on the occasion of their first meeting, throw an arm over his shoulder (which made him very uncomfortable because he didn’t feel he knew Wright) and point to the site of Oboler’s proposed house, saying, “Arch, we are going to build something wonderful over there.” Only later did Oboler learn that Wright was overheard at a party saying, “Well, take Arch Oboler. He is a sentimental man, so I put my arm around him and talked to him about the enduring qualities of the building we would build.”

Although not all of the activities have yet been confirmed, the current schedule outlines sessions on the preservation of Fallingwater and the restoration of nearby Kentuck Knob. Architectural conservators Norman Weiss and Stephen Gottlieb will make presentations on the conservation of concrete, stucco and masonry, and a panel of experts will discuss legal and financial strategies for the preservation of Wright buildings. Jack Quinan will moderate a continuation of last year’s discussion concerning the ethics of ownership. Wright’s approach to landscape design will be presented by Cornelia Brierly of the Frank Lloyd Wright Foundation and Katherine Howett of the University of Georgia. An informative session on how to go about documenting one’s own house is also planned. Some of the expected speakers include Edgar Kaufmann Jr., to deliver the keynote address; Joel Silver, restorer of the Storer House and recent purchaser of Auldbrass Plantation [Silver was unable to attend in the end]; and Edgar Tafel, Byron [Bob] Mosher and Wes Peters, former Taliesin apprentices, to discuss the building of Fallingwater. In addition to the informational sessions, conferees will be treated to a reception at Kentuck Knob, a house designed by Wright in 1954 for the I.N. Hagan family, and a gala dinner at Fallingwater.

Most important, however, was a plenary session in which Thomas M. Schmidt, then director of Fallingwater, proposed the formation of an ad hoc committee to study the feasibility of forming a national Frank Lloyd Wright Conservancy. That was the true beginning of the organization. The next step was an organizational meeting at Wingspread (1937) in Racine, Wisconsin, from June 23-25, 1989, based upon information gathered from a survey that Jeanette Fields and Sandra Wilcoxon sent out in spring 1989 to frame the mission, membership and structure of the Conservancy. There it was decided to incorporate the Conservancy in Illinois and to house the office in Chicago.

Against the background of subsequent meetings in Los Angeles, Oak Park, Fallingwater and Wingspread, it is apparent that there was an inevitability about the formation of the Frank Lloyd Wright Building Conservancy. If it hadn’t begun in Buffalo, the moment was imminent. The organization’s extraordinary achievements of the past 25 years attest to that.