On the afternoon of July 17, 2022, roofers nearing completion of a new torch-down asphalt roof at the 1940 Bazett-Frank House in Hillsborough, on the San Francisco Peninsula in Northern California, left an ember alight somewhere when they left for the day. A small fire developed at the far end of the flat roof above the 1954 studio/playroom addition to the house. A neighbor saw smoke and called the fire department. By the time owner Laurence Frank returned from a visit nearby, they had put out the fire—but not before breaking into the studio via a small window containing one of a set of stained-glass panels added by the owners some years ago; chain-sawing most of the way through one of the 4 x 8 cantilever beams of the roof; punching a hole in the middle of the largest piece of soffit plywood outside the windows of the studio; and tearing away ceiling panels. And the firefighters took away all of the damaged loose material, leaving nothing usable for those who would conduct the necessary repairs.

First steps to a solution

Mr. Frank contacted the Frank Lloyd Wright Building Conservancy. The Conservancy’s preservation programs manager John Waters referred Mr. Frank to long-time Taliesin and Aaron Green associate, Bay-Area architect William J Schwarz, AIA. Bill and I visited the site twelve days after the fire. An insurance adjuster, entirely ignorant of Wright and thus of the significance of the property, had already appeared and rendered a seat-of-the-pants estimate of damages, a figure ultimately multiplied by a factor of nearly three. A restoration construction firm, their ear ever vigilant to the movements of every fire department in the Bay Area, apparently, materialized out of the smoke, as it were, and offered their services, seducing the unwary victim with the attractive promise of dealing with the insurers. Before long it was concluded that their involvement would not be worth the trouble, and that a leaner and more efficient path could be found to restore what had been damaged.

The first challenge to the restorer, a job I willingly assumed, was to find the appropriate materials with which to effect the repairs. Research showed that rotary-cut redwood veneers are not to be had, period, short of sending a boule to an Indiana mill for peeling, which would have resulted in more veneer than we or anyone else would know what to do with, and a bill to match. As no other species was deemed fit for this restoration, it was ultimately decided that the available quarter-sawn veneers would suffice for the exterior work, where, as soffits, they would only be visible from a distance, and where they could likely (in my estimation) be stained to match the well-weathered original work. I also concluded that I would be able to make some veneered panels myself, of material that would come much closer to matching the two required ceiling panels, made originally of the same rotary-cut redwood ply which had, on the interior at least, never seen finish of any kind.

I found a source for the required five or six exterior panels, Jackel Enterprises, a wood-products maker and broker in Watsonville, California. Our carpenter, another lucky find, requested two extra panels to account for the unforeseen, and two more were purchased for use in the event that my efforts fabricating the ceiling panels might fail.

Builder Philip Sarris (Sarris Construction, San Francisco) expressed interest in the job when I mentioned it to him not long after l became involved. He was ultimately selected, from a very short list of possibilities, and turned out to be a fortuitous choice. He and his excellent assistant made short work of repairing the framing, and then re-clad the affected area, using all of the undamaged redwood fascia and a bit of the original soffit ply, deftly fitting the old and new pieces after deciphering the original order of assembly. Their work was gratifyingly fastidious. Nail holes in the original fascia boards were filled with new nails of the same type. The new redwood fascia pieces were milled from reclaimed old-growth lumber; the outermost fascia retains the weathered surface that was found on the timbers selected for the job.

A final piece of good luck arrived in the form of the water-borne stain that was made to coat the new or newly-milled exterior material. I provided San Francisco Paint Source with a scrap of the original weathered soffit material, along with a piece of the new plywood, and they duly arrived at a greenish material which, when applied to the pink redwood, produced the exact brown of the weathered material. I masked all surfaces adjacent to the new wood and rolled and brushed the stain onto the fresh solids and veneers, promptly wiping down to produce a uniform appearance. I intend to leave the interior plywood alone for a few months, to see how much it changes color in that time, before deciding whether or not to apply a tint that will bring it into conformity with the existing plywood.

Their last step was fitting my hand-made ply into place on the ceiling of the studio. The 1/4″ x 1/4″ redwood bead that separates the ceiling panels along their length was intact and did not need to be replicated. The plywood I made used recently-cut redwood—from 2x6s purchased at Beronio Lumber, a local supplier of building materials—not old growth (reclaimed) timber, which often contains irregularities like nail or bolt holes. It seems clear that some tinting will have to be done, sooner or later, to the new ceiling panels, if they are to appear as they should; natural toning, which occurs from exposure to atmosphere and (especially) from UV radiation, can take a very long time to develop. I don’t expect the new material to “catch up” for a long time, if ever, given the time differential and differences in the sources of the two different materials—even though both are redwood. “No two trees are alike” is the clichéd watchword in the world of wood.

A future restoration of the studio may well include removal of the non-original (if handsome and functional) ceiling light fixture. As we speak this is preventing a portion of the larger replacement panel to age and darken. It would probably be a useless exercise to remove it temporarily when I stain the new panels, as the shadowing would prevent the natural darkening process to continue (as it will, stain or no) after the fixture is remounted. Future restoration may well call for replacement of the new panels (this time with stain applied prior to installation, perhaps).

The small smashed colored-glass panel, one of a set that decorates the vertical row of panes found beside the front doors of the house and studio, was repaired and re-installed, along with a pane of 1/4″ low-iron plate glass matching the original material. All glass in the building was originally puttied into place, using a dark red-brown colored putty specified by Wright and Aaron Green’s studio. I matched this when installing the new glass. 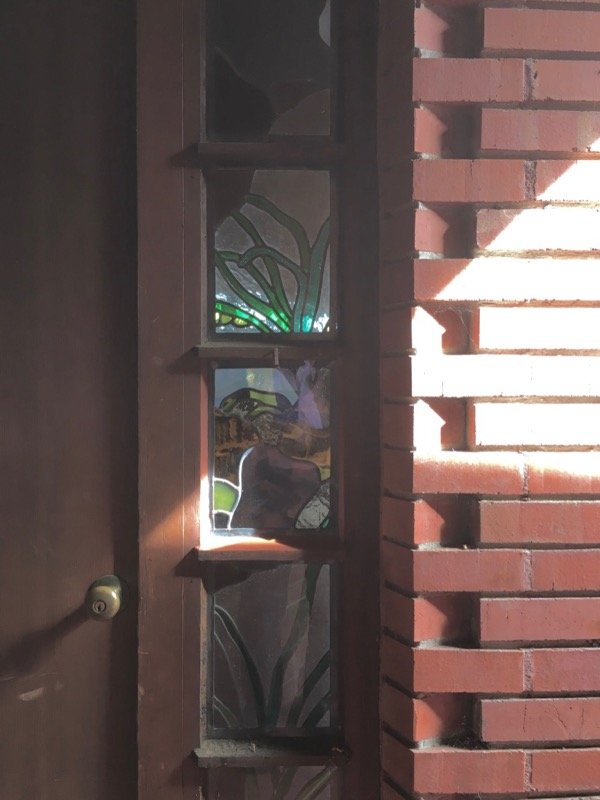 Work ended on the last day of October. It was a pleasure to be able to return the house, in the space of three months, to the way it looked before the mishap. The roofers returned, after Phil had completed installing the outer fascia boards, and in less than three hours wrapped up their roofing job; that’s how close they were to completion when their carelessness caused an extended delay in their schedule . . . and provided some of us with the opportunity to test our skills. 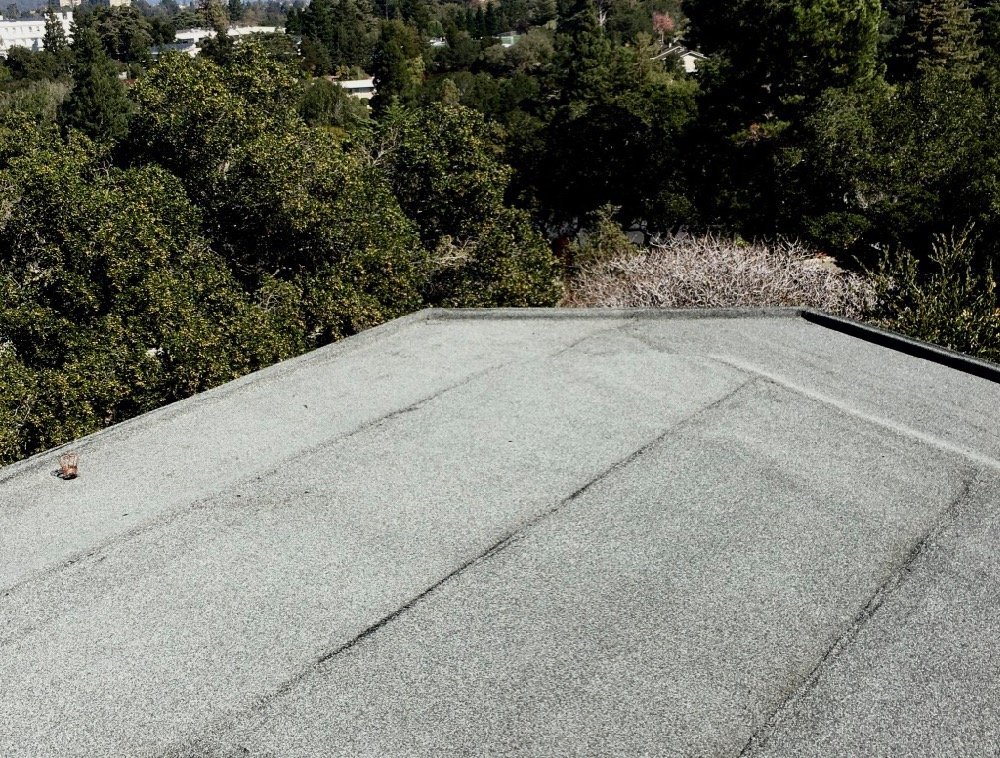 Bill Schwarz provided much-needed expert opinion throughout the process, and I am especially grateful for his guidance and encouragement. Laurence Frank, son of the long-time owners of the property who bought the house from the Bazetts five years after it was built, was the perfect host to our little group, endlessly expressing his gratitude for our help with the work that needed to be done. New friendships ensued, and a feeling of satisfaction seems to be the consensus.

My refugee parents bought the redwood and brick Bazett House in 1945, five years after it was built, and raised three children. By the early 1950’s, we had outgrown the house, originally built for a couple, and they commissioned an addition, still called the New Room, designed by Aaron Green with input from Wright. I remember meeting Wright during the construction, when I was five. I couldn’t bear to sell the house after my mother died in 2009 and moved back here from Berkeley. My parents’ nineteen descendants, plus spouses, met here for a five day family gathering at the end of June, immediately after which I had a new roof put on.

As Steve has described, the roofers caused a fire at the cantilevered east end of the New Room a few hours before completing the job. I was at a loss for finding someone to restore the damaged roof and ceiling, especially after the insurance adjuster responded with a blank look when I told him that this is a Frank Lloyd Wright house. I got in touch with the Frank Lloyd Wright Building Conservancy for advice, and John Waters got back to me immediately, recommending Bill Schwarz, formerly with Aaron Green’s office, to advise. Bill visited the next day with Steve Ritchings (SDR) and they threw themselves into the restoration, as Steve has described here in detail.

Without Steve, Bill, and builder Phil Sarris, I would have been at the mercy of any local contractor using Home Depot lumber and a crew of day laborers hired off a street corner each morning. They did an exquisite job; after three months of loving work, the restoration is 100% faithful to the original. Steve’s craftsmanship and attention to detail is extraordinary.

This home has been the soul of our family for over three quarters of a century. On behalf of the entire Frank clan, I want to express our bottomless gratitude to Steve, Bill, and Phil for making us whole again. 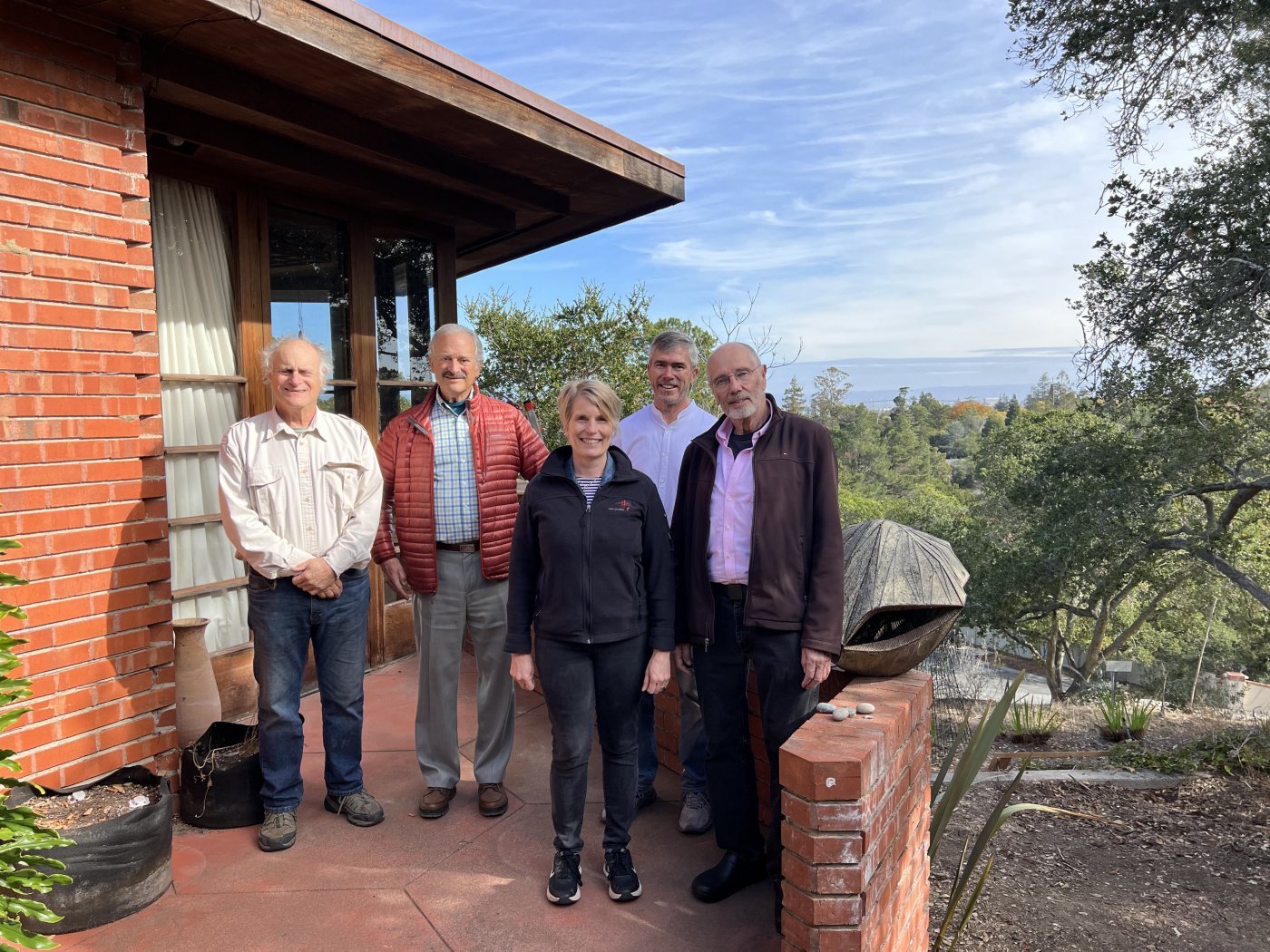 Renovation Time is High-Risk for Your Historic Building

Protecting Your Wright Building from Disaster

An ounce of prevention does indeed payoff when it comes to avoiding losses.

Materials for Refinishing Tidewater Cypress on the Pope-Leighey House

A sustainable and labor-efficient means for refinishing Wright's Usonian houses.