Sustainable Restoration Practices at the the E. Arthur Davenport House

By Paul A. Harding, FAIA

The restoration of the Frank Lloyd Wright-designed E. Arthur Davenport House, in River Forest, Illinois, demonstrates that historic preservation and sustainable design share the same goals and objectives. The techniques used to restore an architecturally significant building preserve a cultural resource for future generations while also providing the environmental benefits of conserving energy, reducing waste and supporting a healthier way of life.

The Davenport House was the first Prairie School house to be built in Chicago and its suburbs. The house was commissioned in January 1901 and completed in November of the same year. An enlarged version of the Davenport House was published as “A Small House with ‘Lots of Room in It’ ” in the July 1901 edition of the Ladies’ Home Journal. The street façade and roof form were significantly altered and the original front terrace removed in a 1931 renovation. The interior had undergone modest changes with each new owner, yet the original fabric of the interior remained intact. Harding Partners is restoring the house with maximum fidelity to the original 1901 design while also incorporating innovative sustainable design practices.

Long before the term sustainable existed, most buildings incorporated at least some sustainable design features. With the Davenport House, Wright integrated the local climate and site conditions to enhance the experience of place and residents’ comfort. The Davenport House utilizes this approach to provide daylight and cross-ventilation, making spaces that are both functional and comfortable. The house is positioned on the north side of the site to maximize the southern exposure. Service spaces are clustered on the north side, providing the living spaces access to daylight throughout the day. The cruciform plan provides each space with daylight, views and ventilation from multiple directions. Casement windows create a localized negative pressure from the passing wind, pulling cooling breezes into the house. Deep overhangs shade the interior from the strong mid-day sun and allow the windows to remain open even during rain storms.

Other design elements of the period are recognized now for the health benefits they provide to residents. The house is located in a relatively dense area within a short distance of a commercial district, cultural institutions, and several public transit lines. The location encourages walking instead of driving, providing opportunities for physical activity and reducing the amount of auto-related pollutants released into the air. The original front terrace provided a semi-private outdoor space that allowed for direct interaction with the environment. Natural finish materials such as the linseed oil floor finish, lime plaster, and the Cassein interior paints are natural products, releasing few volatile organic compounds (VOCs), if any, which can irritate the respiratory system. 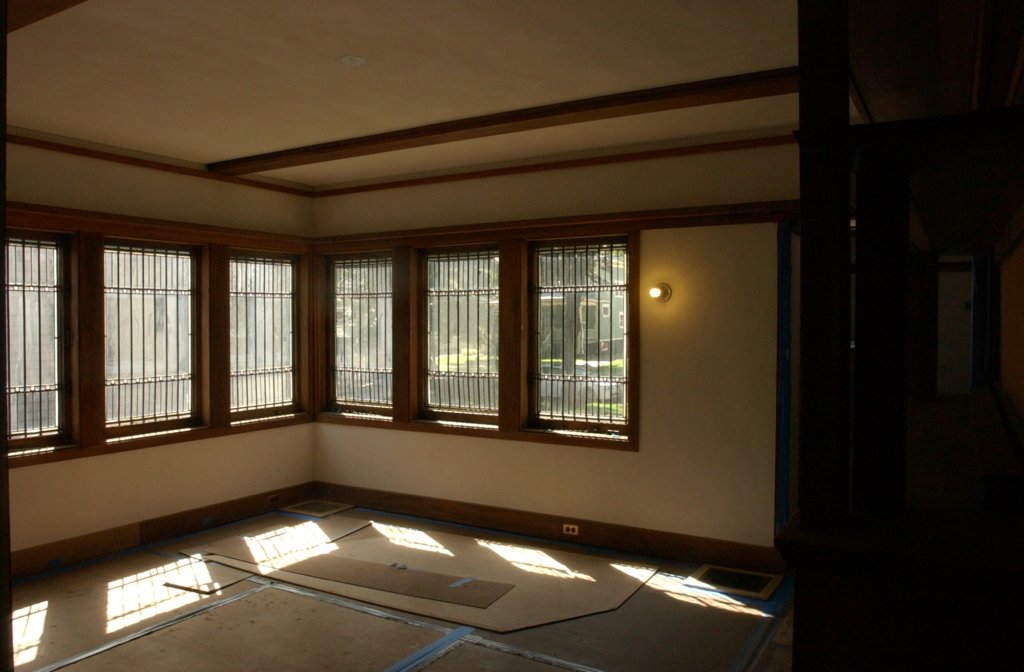 Harding Partners has enhanced several of the sustainable design approaches inherent in the house. Interior insulated storm windows were fabricated with lift-off hinges, allowing cooling breezes to ventilate the house during the warmer months. The interior paint specified is a water-based finish that, similar to the original Cassein paint, is a low VOC-emitting product, but provides a more durable finish. The new paint is also air permeable, allowing the house to breathe, preventing the build-up of mold-causing moisture. The new interior plaster uses the original lime mix, allowing the paint to render the same color on walls of different ages. Harding Partners also specified the use of formaldehyde-free insulation for the exterior walls and attic. While this material is more commonly used in southern climates, the product reduces the amount of irritants released into the house and is mold-resistant. Each of these decisions helped to improve the indoor air quality, providing a healthier living environment.
Sustainable Restoration Practices in the Information Age.

The Davenport House is being restored as a permanent residence. The restoration brings the house into conformance with contemporary building codes, contemporary expectations for user conveniences and comfort, as well as the best practices in sustainable design­—all while maintaining the historic profiles and character of the original design. The most significant aspect of the project is the restoration of the original front octagonal bay and low roof with maximum fidelity to Wright’s original design. The geometry of the original roofline and bay was recreated using historic documents, period photographs, laser-guided measurements and physical evidence uncovered beneath successive layers of building material. The restored façade recaptures the tension between the delicate vertical bay and the broad horizontal line of the front eave. When combined with the soon-to-be-restored front terrace, these elements define a first floor space that moves from inside to outside, connecting the resident with the natural environment. 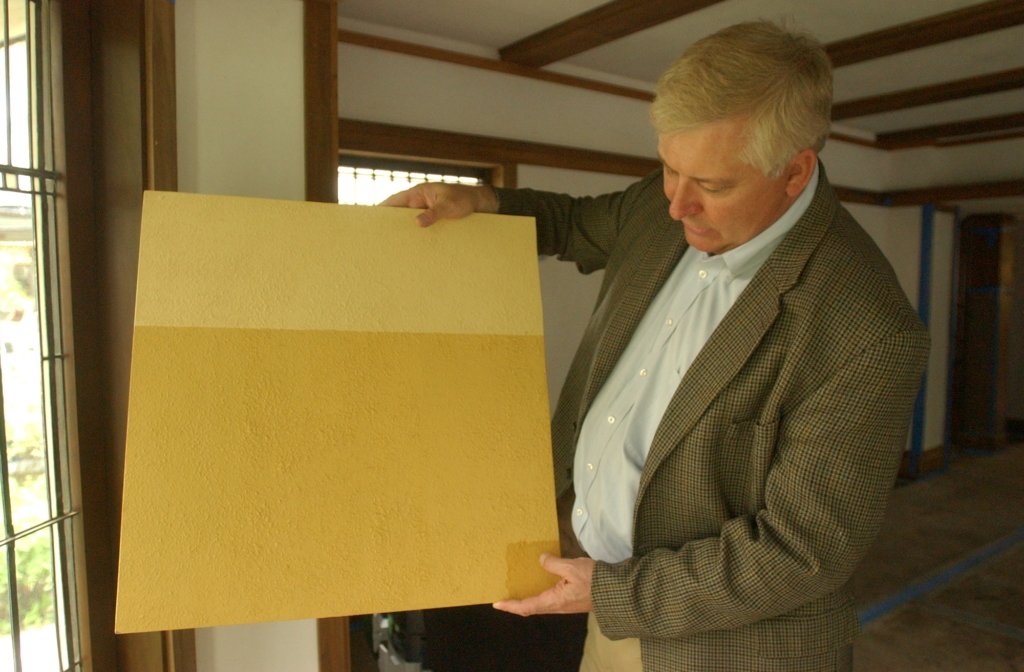 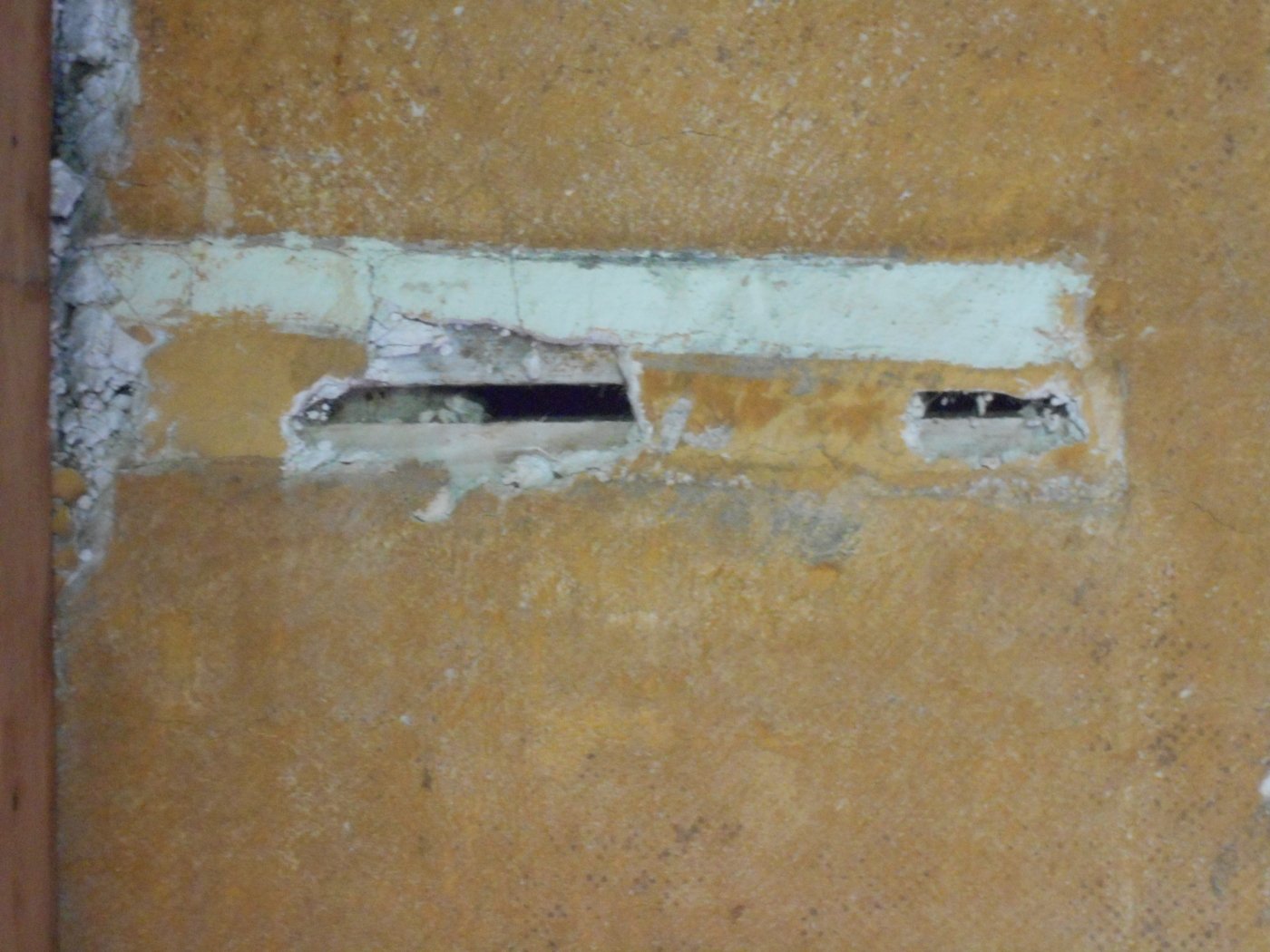 The original facade has been reconstructed using reclaimed cypress siding that matches the original wood. The use of reclaimed cypress supports preservation objectives by providing a material that is consistent with the original in species, texture, color and density. Reclaimed lumber also achieves the sustainability objective of reducing the use of natural resources in that the wood is essentially a recycled material. If new lumber with similar attributes had been specified it would have to be harvested from old-growth trees, which are a natural and cultural resource that should be preserved.

Wherever possible, the original materials found in the house have been reused. Several large panels of interior plaster, for example, had delaminated from the wood lath and were in danger of falling off the wall. Instead of removing the damaged material, Harding Partners used a relatively new process of adhering the plaster to the lath with a structural adhesive injected through the wall. Much of the original window, door and millwork hardware used in the house was mass-produced and widely available. Consequently, it has been possible to replace missing hardware from an abundant supply of reclaimed pieces found in local salvage yards and restoration stores.

The restoration of the E. Arthur Davenport House dramatically reduces the operating costs of the building, provides a healthy living environment for the residents, minimizes the impact on the environment and, most importantly, reintroduces this milestone in Frank Lloyd Wright’s work to the community.

Harding Partners developed an innovative technique for restoring the window and door sashes to their original condition. Many of the sashes had suffered significant water damage over time. Rotted material was removed and reclaimed wood was inserted with an epoxy resin to restore the structural integrity. The reclaimed wood was hand-selected to match the color and grain of the existing material. As the epoxy could not absorb the wood stain used on the rest of the sash, pigment was added to allow the splice to match the color. Finally, a wood grain pattern was etched into the exposed face of the epoxy to transition between the grain of the original and replacement wood. This technique achieved the restoration goal of preserving as much of the original wood as possible while seamlessly preparing the frames for another 100 years of use. The sash restoration also achieves the sustainable design goal of reducing energy consumption. The sashes were made square to fit properly within the frames, and new concealed weather stripping was added to dramatically reduce the amount of air infiltration.

Located in suburban Chicago, the Davenport House is subject to extreme temperatures in both winter and summer. Harding Partners used several techniques to provide heating and cooling without altering the appearance of the house. Separate air handlers serve each floor, with the two units concealed in the basement and the unfinished attic. This approach eliminates the need to run vertical shafts from a single unit in the basement to the upper floor that would alter the floor plan. The original floor registers have been reused. Harding Partners observed that the original chimney flues were oversized relative to the small amount of exhaust generated by the modern furnaces and water heater. The flues were therefore subdivided, allowing each unit to be vented through new liners inserted into the existing chimney. Combustion air is pulled from inside the original coal chute door and attic, eliminating the need for intake pipes extending out from the building. This innovative approach allows for high-efficiency equipment to be used without changing the outside appearance of the house.

The heating and cooling equipment is also designed to be converted to a geothermal system that will condition the house by using the constant temperature of the ground instead of a conventional condenser and furnace. The combination of adding exterior insulation, storm windows, and the geothermal heating and cooling system will reduce energy consumption by 85 percent compared to the original house, 15 percent compared to the current building code, and reduce the house’s operational costs by $3,800 each year. The geothermal system also supports the preservation goal of restoring the original appearance of the house. The new system will eliminate the need for the outside condensers, thus removing the visual and aural distraction of the equipment.

The restoration of the E. Arthur Davenport House dramatically reduces the operating costs of the building, provides a healthy living environment for the residents, minimizes the impact on the environment and, most importantly, reintroduces this milestone in Frank Lloyd Wright’s work to the community.

Designer/maker and Wright devotee Stephen Ritchings details the labor of love that...

A guide to roofing material options for low-slope roofs

Replacing the cedar shingle roof at the Clark House

A conversation with owner Mike Henderson about the process